The following are some important components common to Switchgear Components in Circuit Breakers :

1. Bushings: When a high voltage conductor passes through a metal sheet or frame which is at earth potential, the necessary insulation is provided in the form of bushing. 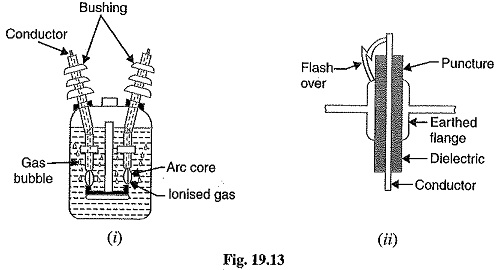 The Primary function of the bushing is to prevent electrical breakdown between the enclosed conductor and the surrounding earthed metal work. Fig. 19.13 (i) shows the use of bushing for a plain-break oil circuit breaker. The high voltage conductor passes through the bushing made of some insulating material (e.g., porcelain, steatite). Although there are several types of bushing (e.g., condenser type, oil filled etc.), they perform the same function of insulating the conductor from earthed tank.

The failure of the bushing can occur in two ways. Firstly, the beakdown may be caused by puncture i.e., dielectric failure of the insulating material of the bushing. Secondly, the breakdown may occur in the form of a flash-over between the exposed conductor at either end of the bushing and the earthed metal. Fig. 19.13 (ii) illustrates these two possibilities. The bushings are so designed that flash-over takes place before they get punctured. It is because the puncture generally renders the bushing insulation unserviceable and incapable of withstanding the normal voltage. On the other hand, a flash-over may result in comparatively harmless burning of the surface of the bushing which can then continue to give adequate service pending replacement.

(a) Tulip type contacts: Fig. 19.14 (i) shows the Tulip type contact. It consists, of moving contact which moves inside the fixed contacts. At contact separation, the arc is generally established between the tips of the fixed contacts and the tip of the moving contact as shown in Fig. 19.14 (ii). The advantage of this type of contact is that arcing is confined to the regions which are not in contact in the fully engaged position.

(b) Finger and wedge contacts: Fig. 19.15 (i) shows the finger and wedge type contact. This type of contact is largely used for low-voltage oil circuit breakers owing to the general unsuitability for use with arc control devices.

(c) Butt contacts: Fig. 19.15 (ii) shows the butt type contact and is formed by the springs and the moving contact. It possesses two advantages. Firstly, spring pressure is available to assist contact separation. This is useful in single-break oil circuit breakers and air-blast circuit breakers where relatively small “loop” forces are available to assist in opening. Secondly, there is no grip force so that this type of contact is especially suitable for higher short-circuit rating. 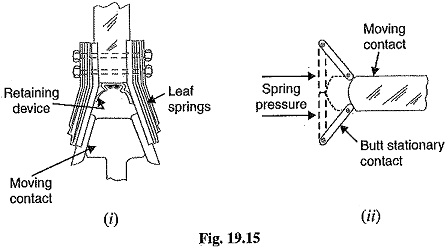 The primary of current transformer is connected in the power line. The secondary winding provides for the instruments and relays a current which is a constant fraction of the current in the line.

Similarly, a potential transformer is connected with its primary in the power line. The secondary provides for the instruments and relays a voltage which is a known fraction of the line voltage. 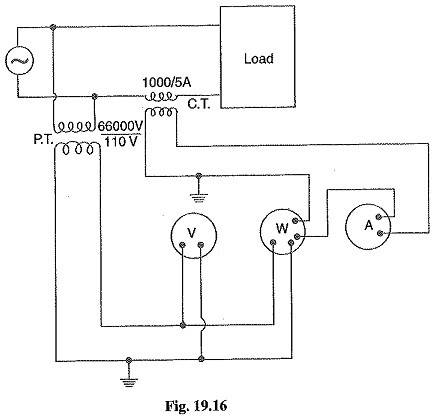 4. Bus-bars and conductors: The current carrying members in a circuit breaker consist of fixed and moving contacts and the conductors connecting these to the points external to the breaker. If the Switchgear Components in Circuit Breakers is of outdoor type, these connections are connected directly to the overhead lines. In case of indoor Switchgear Components in Circuit Breakers, the incoming conductors to the circuit breaker are connected to the bus-bars.