A circuit breaker can make or break a circuit either manually or automatically under all conditions viz., no-load, full-load and short-circuit conditions. This characteristic of the Circuit Breakers Definition has made it a very useful equipment for switching and protection of various parts of the power system.

A Circuit Breakers Definition is a piece of equipment which can

Thus a circuit breaker incorporates manual (or remote control) as well as automatic control for switching functions. The latter control employs relays and opetates only under fault conditions.

A Circuit Breakers Definition essentially consists of fixed and moving contacts, called electrodes. Under normal operating conditions, these contacts remain closed and will not open auto­matically until and unless the system becomes faulty. Of course, the contacts can be opened manually or by remote control whenever desired. When a fault occurs on any part of the system, the trip coils of the circuit breaker get energised and the moving contacts are pulled apart by some mechanism, thus opening the circuit.

When the contacts of a circuit breaker are separated under fault conditions, an arc is struck between them. The current is thus able to continue until the discharge ceases. The production of arc not only delays the current interruption process but it also generates enormous heat which may cause damage to the system or to the circuit breaker itself. Therefore, the main problem in a Circuit Breakers Definition into extinguish the arc within the shortest possible time so that heat generated by it may not reach a dangerous value.

When a short-circuit occurs, a heavy current flows through the contacts of the ‘circuit breaker,before they are opened by the protective system. At the instant when the contacts begin to separate, the contact area decreases rapidly and large fault current causes increased current density and hence rise in temperature. The heat produced in the medium between contacts (usually the medium is oil or air) is sufficient to ionise the air or vapourise and ionise the oil. The ionised air or vapour acts as conduc­tor and an arc is struck between the contacts. The p.d. between the contacts is quite small and is just sufficient to maintain the arc. The arc provides a low resistance path and consequently the current in the circuit remains uninterrupted so long as the arc persists.

Degree of ionisation – the arc resistance increases with the decrease in the number of ionised particles between the contacts.

Cross-section of arc – the arc resistance increases with the decrease in area of X-section of the arc.

Before discussing the methods of arc extinction, it is necessary to examine the factors responsible for the maintenance of arc between the contacts. These are :

Taking these in turn,

1. High resistance method: In this method, arc resistance is made to increase with time so that current is reduced to a value insufficient to maintain the arc. Consequently, the current is inter­rupted or the arc is extinguished. The principal disadvantage of this method is that enormous energy is dissipated in the arc. Therefore, it is employed only in d.c. circuit breakers and low-capacity a.c. Circuit Breakers Definition.

The resistance of the arc may be increased by :

In an a.c. system, current drops to zero after every half-cycle. At every current zero, the arc extinguishes for a brief moment. Now the medium between the contacts contains ions and electrons so that it has small dielectric strength and can be easily broken down by the rising contact voltage known as restriking voltage. If such a breakdown does occur, the arc will persist for another half-cycle. If immediately after current zero, the dielectric strength of the medium between contacts is built up more rapidly than the voltage across the contacts, the arc fails to restrike and the current will be interrupted. The rapid increase of dielectric strength of the medium near current zero can be achieved by :

Therefore, the real problem in a.c. arc interruption is to rapidly deionise the medium between contacts as soon as the current becomes zero so that the rising contact voltage or restriking voltage cannot breakdown the space between contacts. The de-ionisation of the medium can be achieved by:

Important Points to be Remember:

The following are the important terms much used in the circuit breaker analysis :

1. Arc voltage: It is the voltage that appears across the contacts of the circuit breaker during the arcing period.

As soon as the contacts of the circuit breaker separate, an arc is formed. The voltage that appears across the contacts during arcing period is called the arc voltage. Its value is low except for the ‘period the fault current is at or near zero current point. At current zero, the arc voltage rises rapidly to peak value and this peak voltage tends to maintain the current flow in the form of arc.

2. Restriking Voltage: It is the transient voltage that appears across the contacts at or near current zero during arcing period. 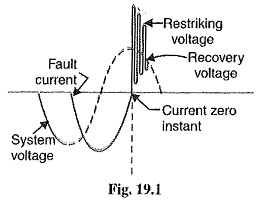 At current zero, a high-frequency transient voltage ap­pears across the contacts and is caused by the rapid distribu­tion of energy between the magnetic and electric fields associ­ated with the plant and transmission lines of the system. This transient voltage is known as restriking voltage (Fig. 19.1). The current interruption in the circuit depends upon this voltage. If the restriking voltage rises more rapidly than the dielectric strength of the medium between the contacts, the arc will persist for another half-cycle. On the other hand, if the dielectric strength of the medium builds up more rapidly than the restriking voltage, the arc fails to restrike and the current will be interrupted.

3.Recovery voltage: It is the normal frequency (50 Hz) r.m.s. voltage that appears across the contacts of the circuit breaker after final arc extinction. It is approximately equal to the system voltage.

When contacts of circuit breaker are opened, current drops to zero after every half cycle. At some current zero, the contacts are separated sufficiently apart and dielectric strength of the medium between the contacts attains a high value due to the removal of ionised particles. At such an instant, the medium between the contacts is strong enough to prevent the breakdown by the restriking voltage. Consequently, the final arc extinction takes place and circuit current is interrupted. Immediately after final current interruption, the voltage that appears across the contacts has a transient part (See Fig. 19.1). However, these transient oscillations subside rapidly due to the damping effect of system resistance and normal circuit voltage appears across the contacts. The voltage across the contacts is of normal frequency and is known as recovery voltage.