Switchgear covers a wide range of equipment concerned with switching and interrupting currents under both normal and abnormal conditions. It includes switches; fuses, circuit breakers, relays and other equipment. Let us discuss Switchgear Equipments briefly here.

1.Switches: A switch is a device which is used to open or close an electrical circuit in a convenient way. It can be used under full-load or no-load conditions but it cannot interrupt the fault currents. When the contacts of a switch are opened, an are is produced in the air between the contacts. This is particularly true for circuits of high voltage and large current capacity. The switches may be classified into (i) air switches (ii) oil switches. The contacts of the former are opened in air and that of the latter are opened in oil.

(i) Air-break switch: It is an air switch and is designed to open a circuit under load. In order to quench the arc that occurs on opening such a switch, special arcing horns are provided Arcing horns are pieces of metals between which arc is formed during opening operation. As the switch opens, these horns are spread farther and farther apart. Consequently, the arc is lengthened, cooled and interrupted. Air-break switches are generally used outdoor for circuits of medium capacity such as lines supplying an industrial load from a main transmission line or feeder. 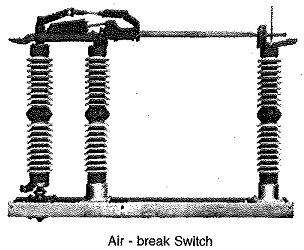 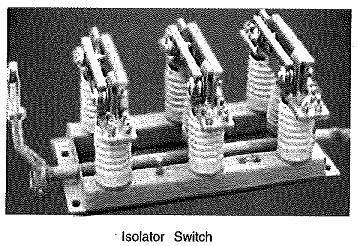 (iii) Oil switches: As the name implies, the contacts of such switches are opened under oil, usually transformer oil. The effect of oil is to cool and quench the arc that tends to form when the circuit is opened. These switches are used for circuits of high voltage and large current carrying

2.Fuses: A fuse is a short piece of wire or thin strip which melts when excessive current flows through it for sufficient time. It is inserted in series with the circuit to be protected. Under normal operating conditions, the fuse element it at a temperature below its melting point. Therefore, it carries the normal load current without overheating. However, when a short circuit or overload occurs, the current through the fuse element increases beyond its rated capacity. This raises the temperature and the fuse element melts (or blows out), disconnecting the circuit protected by it. In this way, a fuse protects the machines and equipment from damage due to excessive currents. It is worthwhile to note that a fuse performs both detection and interruption functions. 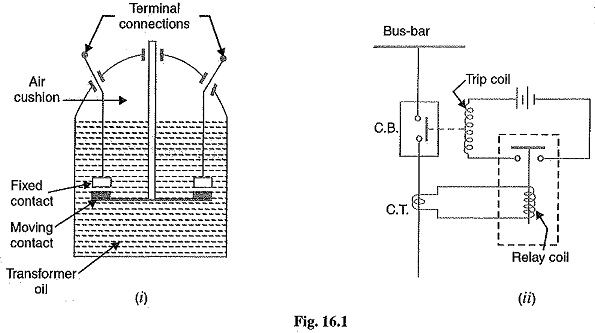 Under normal operating conditions, the contacts remain closed and the circuit breaker carries the full-load current continuously. In this condition, the e.m.f. in the secondary winding of current transformer (C.T.) is insufficient to operate the trip coil of the breaker but the contacts can be opened (and hence the circuit can be opened) by manual or remote control. When a fault occurs, the resulting overcunent in the C.T. primary winding increases the secondary e.m.f. This energises the trip coil of the breaker and moving contacts are pulled down, thus opening the contacts and hence the circuit. The arc produced during the opening operation is quenched by the oil. It is interesting to note that relay performs the function of detecting a fault whereas the circuit breaker does the actual circuit interruption.

4. Relays: A relay is a device which detects the fault and supplies information to the breaker for circuit interruption. Fig. 16.1 (ii) shows a typical relay circuit. It can be divided into three parts viz.

(ii) The second circuit is the secondary winding of C.T. connected to the relay operating coil.

(iii) The third circuit is the tripping circuit which consists of a source of supply, trip coil of circuit breaker and the relay stationary contacts.