Any reduction in the supply frequency, without a change in the terminal voltage, causes an increase in the air-gap flux. Induction motors are designed to operate at the knee point of the magnetization characteristic to make full use of the magnetic material. Therefore, the increase in flux will saturate the motor. This will increase the magnetizing current, distort the line current and voltage, increase the core loss and the stator copper loss, and produce a high-pitch acoustic noise. While an increase in flux beyond the’rated value is undesirable from the consideration of saturation effects, a decrease in flux is also avoided to retain the torque capability of the motor. Therefore, the Variable Frequency Control of Induction Motor Drive below the rated frequency is generally carried out at rated air-gap flux by varying terminal voltage with frequency so as to maintain (V/f) ratio constant at the rated value. From Eq. (6.13)

Variation in terminal voltage with frequency is therefore as shown in Fig. 6.33(a). V is kept constant above the base speed. Below the base speed (V/f) ratio is maintained constant, except at low frequencies where (V/f) ratio is increased to keep maximum torque constant. Corresponding speed torque curves are shown in Fig. 6.33(b) both for motoring and braking operations. The curves suggest that speed control and braking operation are available from nearly zero speed to above synchronous speed.

The Variable Frequency Control of Induction Motor Drive provides good running and transient performance because of the following features:

The most important advantage of Variable Frequency Control of Induction Motor Drive is that it allows a variable speed drive with above-mentioned good running and transient performance to be obtained from a squirrel cage induction motor. The squirrel cage motor has a number of advantages over a dc motor. It is cheap, rugged, reliable and longer lasting. Because of the absence of commutator and brushes, it requires practically no maintenance, it can be operated in an explosive and contaminated environment, and can be designed for higher speeds, voltage and power ratings. It also has lower inertia, volume and weight. Though the cost of a squirrel cage motor is much lower compared to that of a dc motor of the same rating, the overall cost of variable frequency induction motor drives, in general are higher. But because of the advantages listed above, variable frequency induction motor drives are preferred over dc motor drives for most applications. In special applications requiring maintenance free operation, such as underground and underwater installations, and also in applications involving explosive and contaminated environments, such as in mines and chemical industry, variable frequency induction motor drives are a natural choice. They have several other applications such as traction, mill run out tables, steel mills, pumps, fans, blowers, compressors, spindle drives, conveyers, machine tools, and so on. 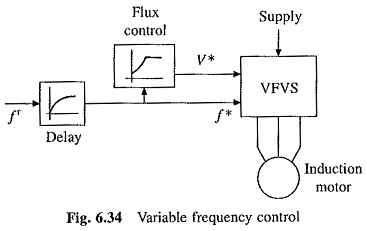 Block diagram of Variable Frequency Control of Induction Motor Drive scheme is shown in Fig. 6.34. The motor is fed from a variable frequency variable voltage source (VFVS). V* and f* are voltage and frequency commands for VFVS. Flux control block produces a voltage command V* for VFVS in order to maintain the relationship of Fig. 6.33(a) between V* and f*. Reference frequency f* is changed to control speed. A delay circuit is introduced between f* and fr, so that even when ft is changed by a large amount, f* will change only slowly so that motor speed can track changes in ft, thus restricting the motor operation for each frequency between synchronous speed and the maximum torque point. VFVS can be a voltage source inverter or a cycloconverter.

Let V and f denote the rated voltage and frequency of the machine. When the motor is operated below the base speed with constant (V/f) control, for a frequency, kf, the terminal voltage will be kV, where k is a factor such that, 0 ≤ k ≤ 1. Thus, as frequency is changed from 0 to f, k changes from 0 to 1 and voltage changes from 0 to V.

Substituting for voltage kV and for frequency kf and neglecting stator resistance drop, from Eqs (6.4) and (6.10)

In Eqs. (6.71) and (6.72) if (ks) is maintained constant as k is varied, then rotor current I′r and torque T will remain constant. Since the slip is small I′r will be in phase with voltage. Since flux is constant Im will also be constant. Now

Thus if the motor operation is carried out at constant value of ks as the frequency is varied then the motor will operate at a constant current and torque. Let us examine the meaning of ks.

Note ωst is the slip speed, which is the difference in the rotating field speed kωms and rotor speed ωm. It is also the drop in motor speed from its no load speed, when the machine is loaded.

The above discussion shows. that for any value of T, the drop in the motor speed from its no load speed (kωms) is the same for all frequencies. Hence, machine speed torque characteristics for 0 < s < sm are approximately parallel curves.

where fr and ωr are rotor frequency in Hz and rad/sec, respectively.

Let us next consider the operation above base speed. As stated earlier, machine operates at a constant voltage V. Now

As the frequency is higher than the rated k > 1. Since the operation is again constrained between the synchronous speed and the maximum torque, slip has a small value, hence

Thus for speeds above the base speed, at a given I′r and hence approximately at a given Is, the slip speed ωsl increases linearly with k (or frequency). This behavior is utilized in closed-loop speed control for limiting the current within permissible value above base speed.

Since the slip is small, I′r is in phase with V. If the machine copper loss is neglected, the developed power Pm is given by

Torque and Power Limitations, and Modes of Operation: 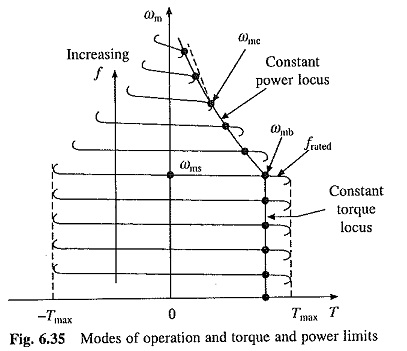 As seen in Figs. 6.35 and 6.36, the motor has a constant maximum torque from zero to base speed ωmb, hence the drive operates in constant torque mode. In this frequency range, V is changed with frequency as shown in Fig. 6.33(a) and the slip speed at the maximum permissible current remains constant. From base speed to speed ωmc, the maximum power has a constant value, hence the motor operates in constant power mode. At speed ωmc (Fig. 6.35), the breakdown torque is reached. Any attempt to operate the motor at the maximum permissible current beyond this speed will stall the motor. Hence, beyond the speed ωmc, the machine is operated at a constant slip speed and the maximum permissible current and maximum power are allowed to decrease (Fig. 6.36). Now the motor current reduces inversely with speed and torque decreases inversely as the speed squared. The operation in this region is required in drives requiring wide speed range but low torque at high speeds. For example in traction applications the drive operates in this region when running at full speed because the torque required in steady state at high speeds is very small compared to its value during acceleration. 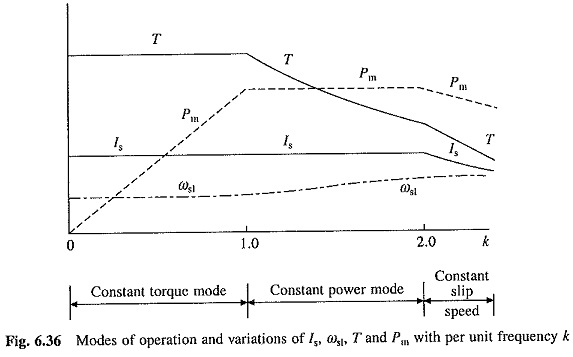