The inverter has an impressed dc voltage. The output voltage of the inverter is decided by the firing and duration of the thyristors. The conduction of the thyristors can be either 180° or 120°, depending upon the control employed. In the case of 180° conduction three thyristors conduct at any instant, two in one half and the third in the other half. The motor phase voltage can be deter­mined from the known potentials of the output terminals. The output voltage is in the form of a square or stepped wave and is independent of load. In case of 120° conduction only two thyristors conduct at any instant, one in the top half and the other in the bottom half. The control is simple compared to the 180° case, but the output voltage is dependent on the load. The Variable Voltage wave forms of these inverters are shown in Fig. 3.94. Due to the extensive use the 180° of the 180° case, a variable voltage inverter is also called a square wave inverter.

At very low speeds there are commutation problems, as the input voltage may not be sufficient for commutating the thyristors. This imposes a lower limit on the frequency.

A multimotor drive is possible using this type of inverter. The commutation is load independent, and the converter and load need not be matched. The converter represents a source and the motor can be plugged on.

Output frequencies up to 1500 Hz are possible using this converter which makes it very suitable for high speeds. Transistorised converters of rating 10 KVA are available up to 6000 Hi

The converters are built upto a rating of 200 KVA. Due to commutation problems at low speeds, the lowest operating frequency is 10 Hz. The speed control range is 1 : 20. The inverter is not suitable for acceleration of the motor on load and for sudden load changes. The dynamic behaviour is poor at low speeds and good at high speeds. 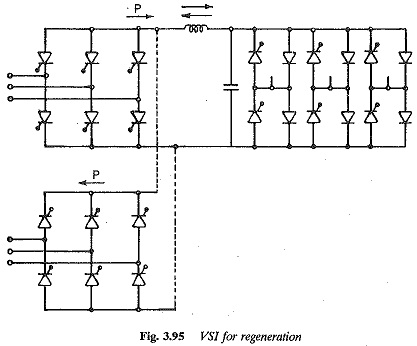 In the case of these inverters, the voltage impressed is constant and voltage control is obtained in the inverter itself using the principle of PWM. The principle is illustrated in Fig. 3.93, with the resulting voltages shown. 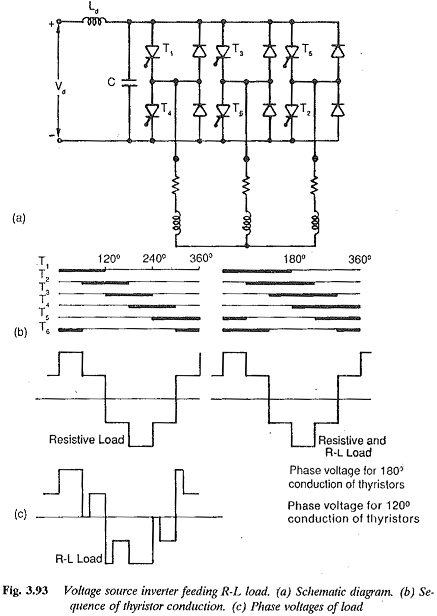 The problem of commutation at low speeds is avoided , which makes it possible to extend the speed control up to zero speed. The Variable Voltage waveform is not a square wave-but is pulsed, depending upon the type of modulation employed. The inverter has a very good dynamic response.

The specific features of this type of inverter can be summarised as follows:

1. It has a constant dc link voltage and uses the PWM principle for voltage control.

2. The output voltage waveform is improved with respect to the harmonic content, which is reduced. Therefore torque pulsations are not a problem, even at low speeds.

3.The parallel operation of many inverters on the same bus system is possible.

5. When a diode rectifier is used the power factor on the ac side is excel­lent.

6. The power and control circuits are complicated, when compared to square wave inverters.

7. Four quadrant operation is possible. During braking a battery or an­other converter with phase control is used on the line side.

8. Both single and multimotor operations are possible. Speed reversal is very smooth and it can be achieved-with full torque capability of the motor. The dynamic behaviour is fast.

12. Open loop operation is possible. The inverter has a fast response and very good dynamic behaviour.