The output voltage of a d.c. source, whether it is a rectifier or any other machine, changes with the load current as well as with the input voltage variations. In order to maintain a constant voltage at the load terminals, it is essential to have a Series DC Voltage Regulator circuit which corrects the variation in voltage. It is essential to keep the change in voltage between ± 0.1% to ± 0.001% depending on the applications.

A d.c. voltage regulator consists of detecting elements which sense the change in voltage from the desired value and controlling elements actuated by the detector in such a manner as to correct the changes. Series DC Voltage Regulator are generally of two types

(a) Series type, and

(b) Shunt or Parallel type.

A second parameter R0 is introduced to define completely the functional performance of a regulator. R0 is the effective internal resistance of the regulator as seen from the output terminals.

where ΔE0 is the change in the output voltage caused due to a change in load current of ΔI0, with the input voltage remaining constant.

The regulation R is defined as,

where RL is the load resistance.

Typical series type regulator and degenerative feedback system of voltage regulation are shown in Figs 6.9a and b respectively. 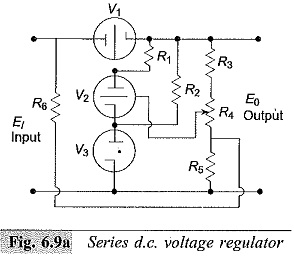 Resistance R6 together with R5 provides a voltage input to the d.c. amplifier (the detector) in proportion to fluctuations in the input voltage in such a way as to reduce the effect of these variations in the output voltage. 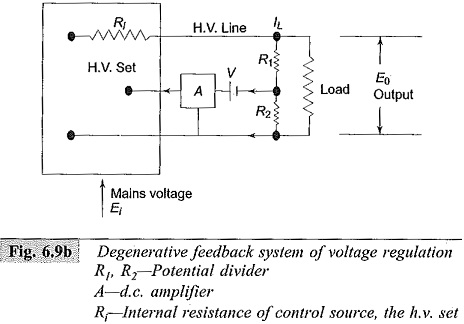 A convenient method of regulating high d.c. voltages is the degenerative feedback system, shown in Fig. 6.9b. The fluctuations in the output voltage are measured by a detecting device, amplified by a d.c. amplifier and fed back into the high voltage set so as to correct for the original fluctuations. The detecting device in the above circuit is the potential divider of ratio β= R1/(R1 + R2). The amplifier is directly coupled and the difference in potential between the tapping on the divider and the amplifier grid voltage is made up by the battery voltage V.

The output voltage E0 is given as follows:

N = ratio between the output voltage of the h.v. set and the main supply voltage,Ei,

A =  gain of the feedback amplifier,

For large values of A

In practice, values of Aβ of the order of 1000 are common. It can be seen that for given value of A, stabilization ratio can be increased by making β as large as possible.

Stabilities to about 2 parts in 104 in high voltage are easily obtained by this method if load changes are kept small.