Rotor Protection – As pointed earlier rotor windings may be damaged by earth faults or open circuits. Figure (6.16) shows a modern method of rotor earth-fault detection. The field is biased by a d.c. voltage which causes current to flow through the relay R for an earth fault anywhere on the field system. 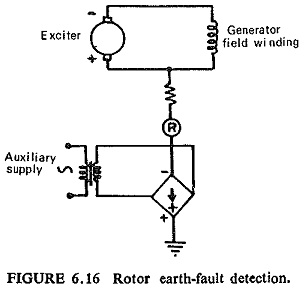 Detection of rotor open circuits is the same as that used for detecting loss of excitation.

Steam sets which are controlled by fast acting gevernor gear respond rapidly to the initial speed rise in the event of load being suddenly lost, unlike hydraulic sets. Hence overspeed protection is more necessary in case of hydraulic sets, which is a reverse or underpower interlock relay to prevent the main generator circuit breaker being tripped under nonemergency conditions until the set output has dropped to a value low enough to prevent overspeed on loss of load.

This is supplementary to the mechanical overspeed device which is usually in the form of centrifugally operated rings, mounted on the rotor shaft, which fly out and close the stop valves if the speed of the set increases more than 10%.

The relay is energized from a single-phase voltage transformer, and is usually of the induction pattern with an IDMT characteristics. The relay opens the main circuit breaker and the field switch if the over voltage persists.