Optimal Operation of Generators on a Bus Bar:

Optimal Operation of Generators on a Bus Bar – The major component of generator operating cost is the fuel input/hour, while maintenance contributes only to a small extent. The fuel cost is meaningful in case of thermal and nuclear stations, but for hydro stations where the energy storage is ‘apparently free’, the operating cost as such is not meaningful. 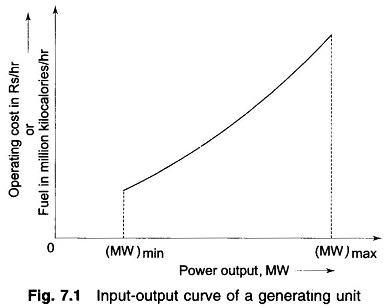 The input-output curve of a unit can be expressed in a million kilocalories per hour or directly in terms of rupees per hour versus output in megawatts. The cost curve can be determined experimentally. A typical curve is shown in Fig. 7.1 where (MW)min is the minimum loading limit below which it is uneconomical (or may be technically infeasible) to operate the unit and (MW)max is the maximum output limit The input-output curve has discontinuities at steam valve openings which have not been indicated in the figure. By fitting a suitable degree polynomial, an analytical expression for operating cost can be written as

where the suffix i stands for the unit number. It generally suffices to fit a second degree polynomial, i.e. 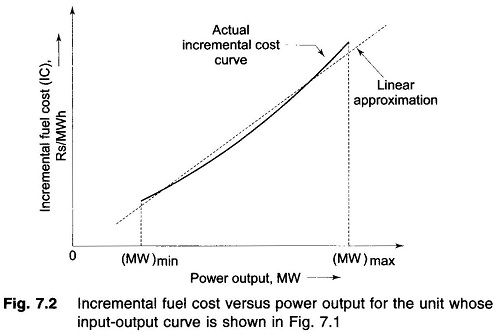 i.e. a linear relationship. For better accuracy incremental fuel cost may be expressed by a number of short line segments (piecewise linearization). Alternatively, we can fit a polynomial of suitable degree to represent IC curve in the inverse form

Let us assume that it is known a priori which generators are to run to meet a particular load demand on the station. Obviously

where PGi, max is the rated real power capacity of the ith generator and PD is the total power demand on the station. Further, the load on each generator is to be constrained within lower and upper limits, i.e.

Considerations of spinning reserve require that

The question that has now to be answered is: ‘What is the optimal manner in which the load demand PD must be shared by the generators on the bus?’ This is answered by minimizing the operating cost

under the equality constraint of meeting the load demand, i.e.

Further, the loading of each generator is constrained by the inequality constraint of Eq. (7.5).

Since Ci(PGi) is non-linear and Ci is independent of PGj (j ≠ i), this is a separable non-linear programming problem.

If it is assumed at present, that the inequality constraint of Eq. (7.4) is not effective, the problem can be solved by the method of Lagrange multipliers. Define the Lagrangian as

where λ is the Lagrange multiplier.

Minimization is achieved by the condition

where dCi/dPGi is the incremental cost of the ith generator (units: Rs/MWh), a function of generator loading PGi. Equation (7.10) can be written as

i.e. the Optimal Operation of Generators corresponds to the equal incremental cost point of all the generators. Equation (7.11), called the coordination equations numbering k are solved simultaneously with the load demand equation (7.8) to yield a solution for the Lagrange multiplier λ and the optimal loading of k generators.