To cater to the different starting and running requirements of a various industrial applications, several Standard Types of Squirrel Cage Motors are available in the market. The torque-speed characteristics of the most common designs are shown in Fig. 9.58. The effective resistance of the rotor cage circuit is the most important design variable in these motors. 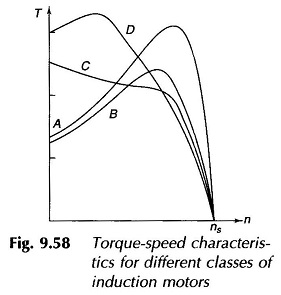 There are four main Classes (A, B, C, and D) in the types of Squirrel Cage Motors:

They have normal starting torque, high starting current, and low operating slip. (0.005-0.015) with low rotor circuit resistance, they work efficiently with a low slip at full load. They are used where the load torque is low at start (e.g. fan, pump load) so that full speed is achieved quickly, thus avoiding the problem of overheating while starting.

These motors have similar values of full-load slip and efficiency and are good general purpose motors used for various industrial applications such as constant speed drives (e.g. fans, pumps, blowers).

They have high starting torque, low starting current, and high operating slip. The torque-slip characteristics is similar to that of a wound-rotor motor with some external resistance in the rotor circuit. The full load slip is high making running efficiency low. These motors are used for driving intermittent loads requiring rapid acceleration and high impact loads such as punch presses or shears. For impact loads a flywheel is fitted to the system to provide kinetic energy during the impact.