Most high precision frequency standard in use utilise a geometric transverse (GT) cut quartz crystal as the frequency controlling resonant elements having changes in frequency of less than 1 part in 10 million per day. This GT quartz has the outstanding characteristic of exhibiting little variation in frequency over a temperature range of 0 — 100°C.

The bridge stabilised Meacham oscillator given in Fig. 19.2 is a constant frequency oscillator of very high stability. 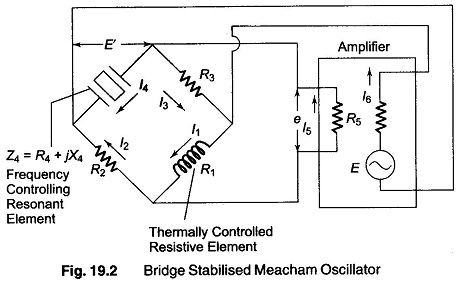 It consists of a Wheatstone’s bridge and an amplifier section. One of the four bridge arms is a thermally controlled resistance element, two of the arms are fixed resistances, and the fourth is a frequency controlling sensitive element, i.e. crystal.

Because of the presence of a thermally sensitive element having a large positive temperature coefficient of resistance (a small tungsten filament lamp of low wattage rating), the output of the bridge is amplitude stabilised and relatively insensitive to small changes in circuit parameters and fluctuations in power supply.

The primary time and frequency standards are based on astronomical determination of the earth’s rotation. A secondary primary standard, an atomic clock developed at the National Bureau of Standards, is based on control of a quartz crystal oscillator by the constant natural frequency associated with the vibration of the atoms in the ammonia molecule. The molecular spectral line of ammonia gas is taken as a stabilizing control.

An auxiliary oscillator, known as search oscillator, is swept through a small frequency range of 6 MHz centered on the frequency of gas resonance. The strongest absorption line observed for ammonia gas is at a frequency of 23,870.1 MHz. A waveguide cell containing ammonia gas at low pressure exhibits a sharp resonance at this frequency. It is coupled to the gas cell and there is a decrease in the transmitted power when the frequency passes through the gas resonance.

The detected signal therefore consists of a series of negative pulses. The search oscillator is mixed with the stabilised oscillator, and when the difference in their frequency is the same as that of the tuned amplifier, a pulse of energy is transmitted through the amplifier. A second series of pulses is thus obtained. The two sets of pulses are mixed in a discriminator, which produces an error voltage proportional to the phase difference of the pulses. The controlled oscillator is thus held at a frequency which differs from that of the gas resonance by the frequency of the tuned amplifier.