In all its Tunnel Diode Applications, the tunnel diode should be loosely coupled to its tuned circuit. With lumped components, this is done by means of a capacitive divider, with the diode connected to a tapping point, while the divider is across the tuned circuit itself. In a cavity, the diode is placed at a point of significant, but not maximum, coupling. The other point of significance is the application of dc bias. This must be connected to the diode without interfering with the tuned circuit. 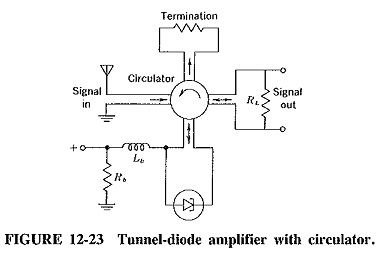 The simplest way of doing this is with a filter, as shown in Figure 12-23. Basically, this filter prevents the diode from being short-circuited by the supply source, while ensuring that no positive resistance is added to interfere with the negative resistance of the diode. Also, the addition of capacitance across the diode is avoided. Care must be taken to ensure that the bias inductance does not introduce spurious frequencies in the bandpass.

As shown in Figure 12-23, the tunnel-diode amplifier (TDA), like the parametric amplifier, requires a circulator to separate the input from the output. Their layouts are very similar, with the very significant difference that no pump source is required for the TDA.

Tables 12-1 and 12-2 show a number of low-noise microwave amplifier performance figures, including those of tunnel-diode amplifiers. It is seen that the tunnel diode is a low-noise device. The twin reasons for this are the low value of the parasitic resistance rs (producing low thermal noise) and the low operating current (producing low shot noise). In such low-noise company, TDAs are as broadband as any, are very small and simple and have output levels on a par with paramps and masers. The available gains are high, and operating frequencies in excess of 50 GHz have been reported.

Tunnel Diode Applications may be used throughout the micro­wave range as moderate-to-low-noise preamplifiers in all kinds of receivers. GaAs FET amplifiers are more likely to be used in current equipment up to 18 GHz. Large bandwidths and high gains are available from multistage amplifiers, the circuits and power requirements are very simple (typically a few milliamperes at 10 V . dc), and noise figures below 5 dB are possible well above X band. It is worth noting that TDAs are immune to the ambient radiation encountered in interplanetary space, and so are practicable for space work.

Tunnel diodes are diodes that may be used as mixers. Being also capable of active oscillation, they may be used as self-excited mixers, in a manner similar to the transistor mixer. Being high-speed devices, Tunnel Diode Applications also lend themselves to high-speed switching and logic operations, as flip-flops and gates. They are used as low-power oscillators up to about 100 GHz, because of their simplicity, frequency stability and immunity to radiation.