When several converters are connected in series and controlled one after another, it is called sequence control. The reactive power requirement of the converters in this method is considerably less than the sum of each individually.

On the other hand, if the 3-phase converters are controlled such that con­verter I operates as an inverter (Fig. 3.65) and converter II as a rectifier, then when the firing angle of the former is 180° and that of the latter is 0°, the dc voltage Vdiα = 0. The individual converters require zero reactive power. 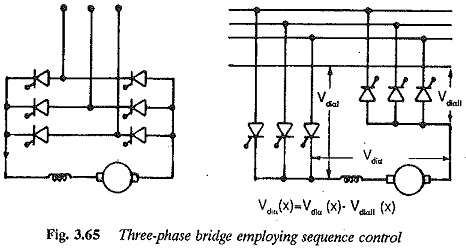 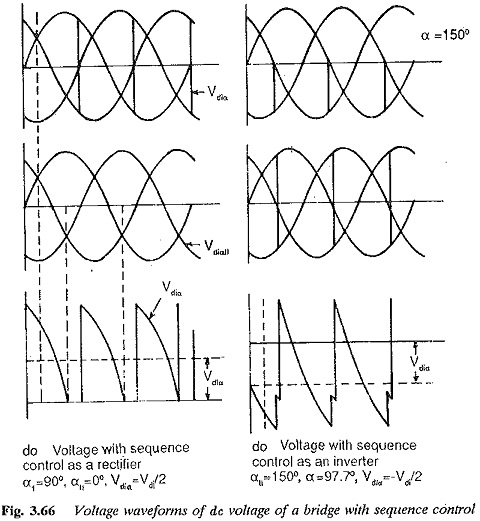 The inverter limit should be given due consideration. Two bridge type converters can also be used for sequence control. The individual bridges may have different initial overlap angles. The dc voltage at the output terminals of 3-phase bridge converters in sequence control is shown in Fig. 3.66a for rectifier operation and Fig. 3.66b for inverter operation.

2.Series connection of two bridge converters with sequence control of both:

This arrangement has a behaviour similar to that of bridge circuit with sequence control of individual converters. It has an advantage of reduced ripple content because of 6-pulse operation.

The arrangement is depicted in Fig. 3.67. The bridges are supplied from a transformer having two secondaries, each supplying one bridge. The reactive power requirement of this arrangement is less than that of a single converter having sequence control in its halves. The converter should be controlled with a definite margin angle of quenching, which decides its inverter limit. It is not worthwhile having more than two converters in series. 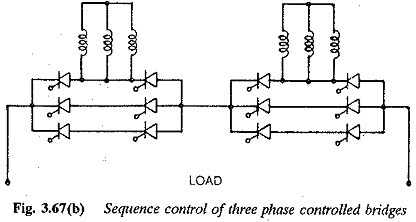 Optional free wheeling in the bridges using thyristors is given in Fig 3.68. 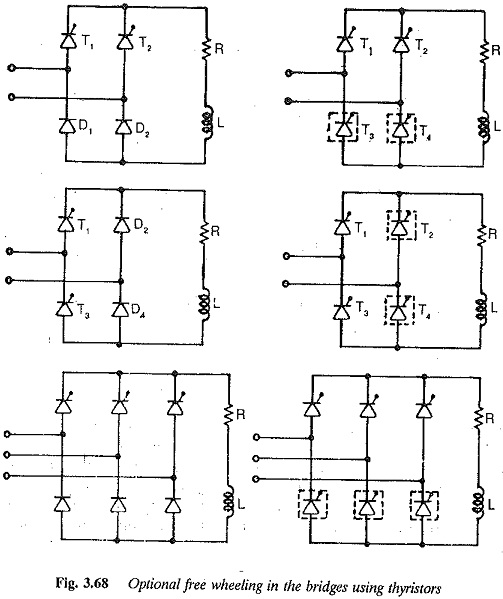