The basic principle of control of a Chopper Circuit is the effective change of the value of the time ratio. This is done in two ways: 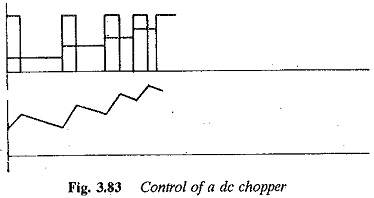 In current limit control (Fig. 3.84), the load current is allowed to vary between two given (upper and lower) limits. The ON and OFF times of the Chopper Circuit adjust automatically. When the current increases beyond the upper limit the chopper is turned off. The load current free wheels and starts to decrease. When it falls below the lower limit the Chopper Circuit is turned ON. The current starts increasing in the load. The load current and voltage waveforms are shown in Fig. 3.84. The amplitude of the ripple can be controlled in this case by assuming proper limits of current. The lower the ripple current, the higher the chopper frequency. By this switching losses increase. Discontinuous conduction can also be avoided in this case, which makes this method superior to time ratio control in this regard. 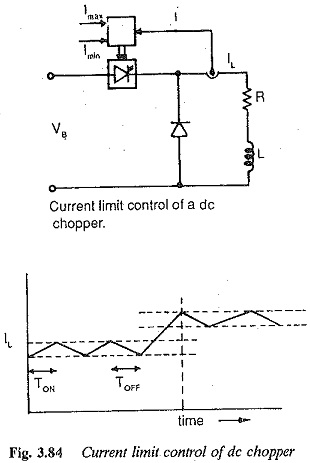