A Basic Principle of Chopper Circuit is essentially a thyristor switch in series with the load as shown in Fig. 11.27(a). A shunting diode is provided across the load for free-wheeling the load current when the thyristor is off. The thyristor shown enclosed by a dotted square can be turned-on and turned-off over a time period and the cycle is repeated. 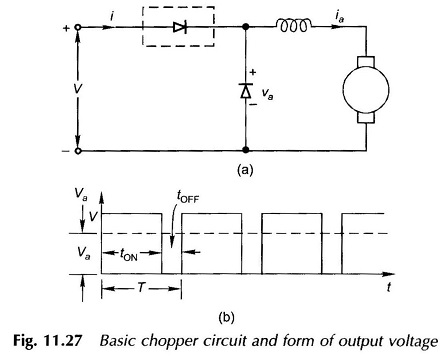 The flow of dc current through the chopper during the on-period necessitates the use of a forced commutation circuit for turning off the thyristor. The average value in the Principle of Chopper Circuit output voltage waveform shown in Fig. 11.27(b) is given by

It is therefore seen that the output voltage of a basic principle of Chopper Circuit is controlled by its duty cycle. It can be varied in the following ways:

In this system f = 1/T (fixed), i.e. the chopping frequency or period are fixed and tON is varied to control α. This is pulse-width modulation. Figure 11.28 illustrates this system of control.

Here the chopping period T is varied and either tON or tOFF is held fixed as illustrated in Fig. 11.29. This is frequency modulation. This method of control presents two difficulties: (i) Control of Va requires variation of chopping frequency over a wide range. Filter design for variable-frequency operation is difficult. (ii) At low output voltage, a large value. of tOFF makes the motor current discontinuous.

Chopping frequencies as high as several hundred cycles/second are used in practice. 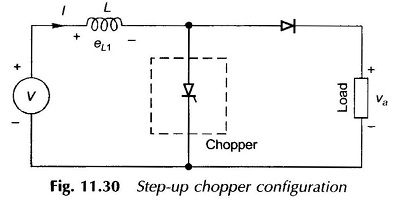 On the basis of average values, during the time the chopper is on, the energy stored in the inductor from the source is

During the time the chopper is off, the energy fed from the inductor to the load is

Assuming a lossless system, under steady-state the two energies will be equal, i.e

For α varying between 0 to 1, the theoretical load voltage varies from V to ∞.

The step-up chopper can be employed for regenerative braking of a dc motor. In Fig. 11.30 if V represents the motor armature and Va the dc source, power is fed from the decreasing voltage motor to a higher but fixed voltage source.

The voltage and current waveforms for the chopper configuration of Fig. 11.27(a) for a continuous current case are given in Fig. 11.31. 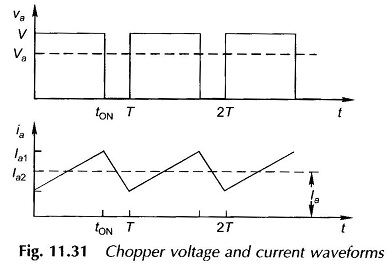 It has already been mentioned that the thyristor in a chopper has to be turned off by auxiliary commutation circuitry. The commutation can be broadly classified as:

In this type of commutation, current through the thyristor is forced to become zero to turn it off. This can be accomplished in two ways.

The load current flowing through the thyristor either becomes zero (as in natural or line commutation employed in converters) or is transferred to another device from the conducting thyristor.