Figure 11.34 shows a Current Commutated Chopper Circuit. The main thyristor Th1 of the chopper is commutated by a current pulse generated in the commutation circuitry. The sequence of operation is given below, and various significant waveforms are shown in Fig. 11.35. It is to be noted that this charging of the capacitor C takes place from the source V through resistance R and the oscillation of the LC combination is set to be far faster than the RC charging transient. 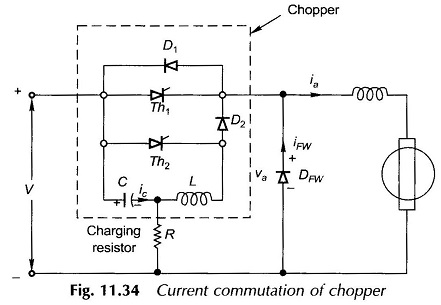 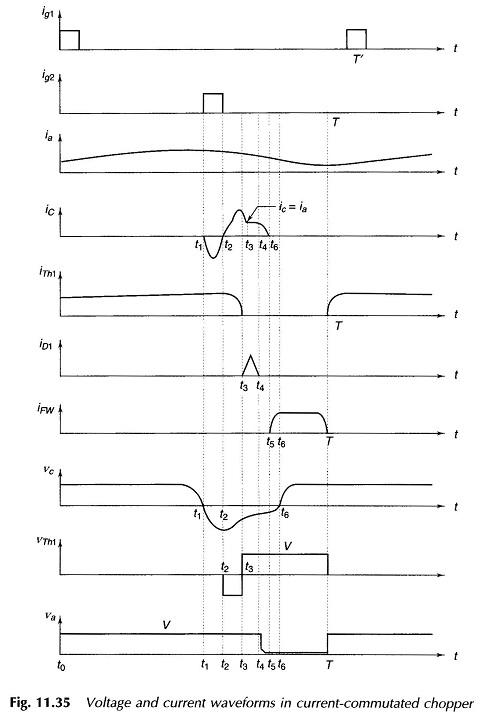 At t5, the DFW becomes forward biased and starts to conduct the load current ia. The oscillatory circuit consisting of C and L is now subjected to new circuit conditions through V, C, L, D2 and DFW and iC decays to zero at t6 leaving νc less than V. During t5 to t6, ia=iC+iFW and therefore, as iC decays, iFw builds up. From t6 onward, load current free-wheels through DFW and decays. The capacitor voltage νc also decays because of discharge through R.

At t = T, the main thyristor Th1 is fired again, and the cycle repeats.

This Current Commutated Chopper Circuit has several advantages. Commutation is reliable as long as load current is less than the peak commutation current iC. The capacitor always remains Charged with right polarity.