Magnetic Properties of Materials – From the magnetic point of view a material is classified according to the nature of its relative permeability (μr). All nonmagnetic materials are classified as paramagnetic ,μr slightly greater than 1, and diamagnetic, μr slightly less than 1. For all practical purposes, μr of these materials can be regarded as unity, i.e. their Magnetic Properties of Materials are very much similar to that of free space. Such materials are not of interest to us in this treatise.

Magnetic Materials are characterized by high permeability and the nonlinear B-H relationship which exhibits both saturation and hysteresis. The physics of these Magnetic Properties of Materials is explained by the domain theory of magnetization usually taught in junior level courses. 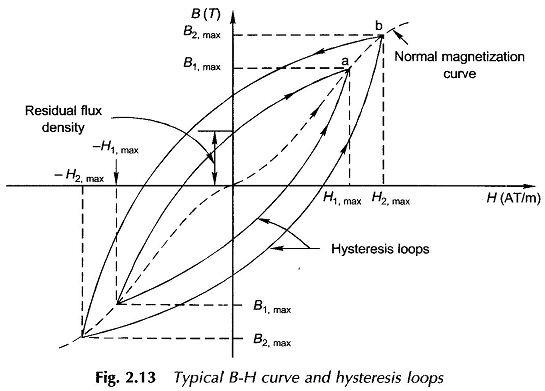 It is easily seen that because of hysteresis and saturation, the magnetic characteristic of a given material cannot be described by a few overall parameters but must be expressed in the form of a set of curves. It will be shown already that the area of the hysteresis loop is the energy loss (it appears in the form of heat energy) per unit volume in one cycle of magnetization. This loss depends upon the quality of material and the maximum flux density at which the material is operated.

Hysteresis loop as such is of little use in engineering applications except in illustrating the waveform of the exciting current. It is the normal (dc) magnetization curve which is of direct application in magnetic circuit calculations and design. In short form it will be referred as the magnetization curve. The hysteresis loss represented by the loop area is usually lumped with the eddy-current loss and the two together are known as the core (or iron) loss which is parameterized by material thickness and frequency and is expressed as loss per unit volume (specific loss).

Nearly all transformers and certain parts of electric machines use silicon steel in the form of sheets, thinly insulated on each side. Silicon is added to steel to increase its resistivity thereby reducing the eddy-current loss. Building the core out of thin sheets (laminations) greatly aids in reduction of the eddy-current loss.

The crystalline structure of silicon steel is body centred cubic an atom at each corner of the cube and an atom at the cube centre. The cubic structure presents considerable ease of magnetization (high μr) along the cube edge as compared to the diagonal on the cube side and the diagonal through the cube body which is most difficult to magnetize. Therefore, if silicon steel crystals are aligned so that the cube edges lie parallel to the direction of magnetization, the material has a much higher relative permeability and can be operated at much higher flux densities with moderate exciting currents and also has superior core-loss qualities. This crystal arrangement is illustrated in Fig. 2.14. The crystal arrangement is practically achieved by cold-rolling steel sheets. The material is then termed as cold-rolled grain-oriented steel (crgos) and is invariably employed in electromechanical devices. Annealing of silicon steel sheets further helps in proper alignment of crystals. The saturation flux density and electric resistivity are of course independent of the grain orientation. 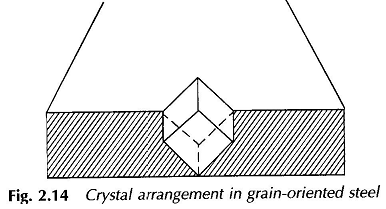 When ferromagnetic materials are subjected to magnetizing mmf, these undergo small changes in dimensions. The lengthwise change is of the order of 10-5 m and is accompanied by transverse changes of the opposite sign. These changes are caused by magnetostriction. Their nature is hysteric with consequent dissipation of energy when magnetization is alternating. Further, there are associated mechanical stresses which produce noise in audible bandwidth which can be a nuisance for high flux densities employed in transformers in modern practice. Magnetostriction noise may, therefore, be the subject of limiting specifications in transformers. 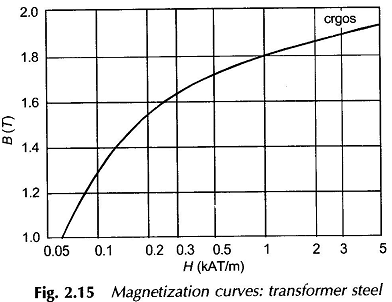 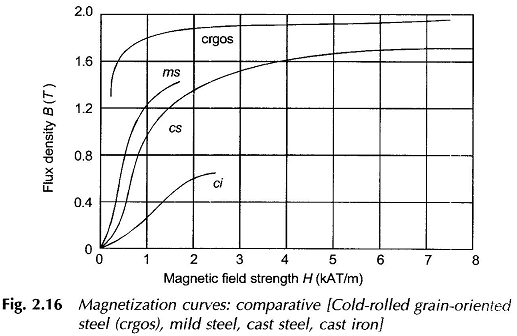