What is Power Electronic Converter?:

As per the function, four basic categories have already been discussed . Out of these, ac/dc converters, cycloconverters and ac/ac voltage regulators using SCR’s are of the naturally commutated type.

The inverter circuits may be further categorized as per their source nature as voltage source inverters (VSI) and current source inverters (CSI). This classification depends on the type of filter and control used on the dc terminals of the Power Electronic Converter. The VSI switches dc voltage in controlled blocks to the load whereas in CSI, the dc current is switched in blocks to the load. However, it is felt that with its somewhat inflexible topology, CSI converter will slowly fade from the scene.

The transistor converters which do not need auxiliary commutating circuits, have almost completely replaced SCR converters below 100 HP. The availability of low-cost high power bipolar junction transistors has also made possible the use of pulse width modulation (PWM) to improve motor current waveform.

Another grouping depends on whether the power flow is restricted by the converter to one direction only (that is, from supply to load), called one quadrant converter or can reverse (that is, load can regenerate), called two-quadrant converter. Four quadrant operational obtained using two full converters connected back to back providing output voltage and output current both of which can be reversed. This is also called a dual converter. They are normally used in high power variable speed drives.

Fig. 11.13 shows the v-i characteristics of a dual converter. 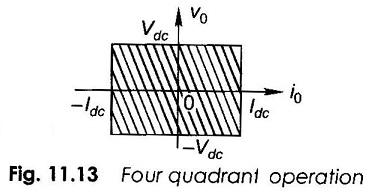