Telemetry in Electronic Communications consists of performing measurements on distant objects. Although hydraulic or wire circuits may be used for this purpose, this section will deal with radiotelemetry only, particularly as this form is now prevalent. The alternatives to radiotelemetry are either having observers on the spot or having some form of multitrack recorders on the site from which data may be collected when conve­nient. However, there are situations in which neither of these alternatives is possible, and in fact radiotelemetry arose in the early 1940s from the need to obtain in-flight information from fighter aircraft and then early missiles. These had such excellent chances of crashing out of control that placing observers or even recorders on board was considered too risky.

Since it was even then required to monitor several quantities simultaneously, the demand for multichannel radiotelemetry arose immediately. The systems were quickly extended to include remote control of such flights, followed by the remote control and light testing of guided missiles, satellite launching and control in orbit, and finally control of extraterrestrial probes. Many other applications of radio-telemetry also exist, including remote-location gathering of meterological data and control of petroleum pipeline systems.

Since radiotelemetry can become quite complex, with problems associated with transmitters, antenna location and orientation, and noise and interference, the other two forms of data acquisition are always investigated first. Because of space and weight limitations, there is a limit on the total data that can be stored, however, and for obvious reasons human observers are sometimes unacceptable. As a result, radiotelem­etry is used widely but not indiscriminately.

Since several channels must always be sent simultaneously in radiotelemetry, and it is impracticable to use a different radio link for each, either frequency-division or time-division multiplexing is always used; or (as shown in Figure 13-13) both. 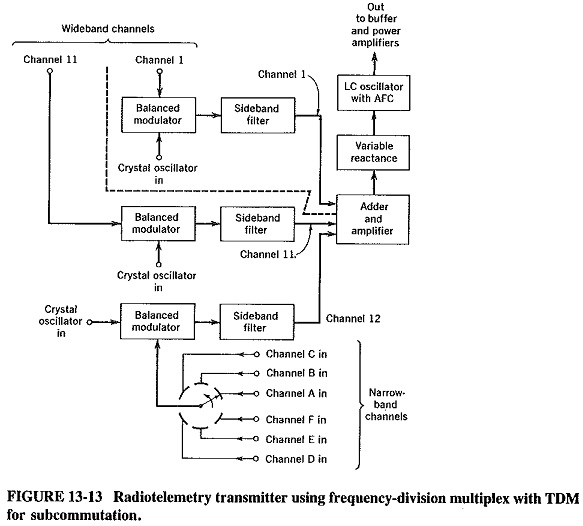 If, for example, Telemetry in Electronic Communications is used with a pilotless aircraft, not all the telemetered variables change at the same rate. Airspeed and altitude change relatively slowly, whereas wing flutter and attitude may change quite rapidly. As a result, there is need for both narrowband channels for handling the slow variations and (relatively) wideband channels for the faster variations. The mixture is achieved by a process known as subcommutating, of which a mechanical version is illustrated in Figure 13-13.

Since complex modulation arrangements are in force, some sort of standardiza­tion is required when describing a given system, and by custom one works from the individual channel. For example, SSB/FM is a system in which each of the channels modulates it subcarrier using SSB, and then all the modulated subcarriers frequency-modulate the main carrier; this is in fact the FDM system. PCM/AM means time-division multiplex of pulse-code modulation, with the pulse train amplitude-modulating the main carrier. Finally, PWM/AM/FM would be a system in which the subcarriers are amplitude-modulated by their signals, and in turn they frequency-modulate the main carrier. Also, one of the channels has been subcom­mutated, and each of the subchannels is fed PWM.

A large number of telemetering systems are used in practice, since rigid stan­dardization has not fully taken place in this field. However, the FM/FM frequency-division multiplexing system is used quite widely in the United States and is extended to PAM/FM/FM when subcommutating is needed. It has the advantages of reliability and flexibility, but it requires greater bandwidth and carrier strength than the purely pulse systems. Systems such as PPM/AM, PWM/FM, PAM/FM and even PCM/FM have all been used in certain applications, with varying advantages for each. One of the main advantages of the purely pulse systems, such as PCM/AM, is that if subcom­mutation is required, the subcommutator can be synchronized with the main commutator, simplifying circuitry and reducing frequency drifts.

Typical operating frequencies of radiotelemetry systems are of interest, since they affect the performance and design of the equipment. According to the FCC and international regulations and agreements, the frequency bands allocated to radiotelem­etry are 216 to 220 MHz and 2.2 to 2.3 GHz. To ensure reliability, space and frequency diversity are used extensively.