Extraterrestrial Communications : The most recent, and by far the fastest-growing, field of communications involves the use of various satellite relays, of which the first was launched in 1957,-12 years after the practicability and orbital positioning of stationary satellites were first described and calculated. The field may be subdivided into three parts, each with somewhat differing requirements. First, there is Extraterrestrial Communications with, and tracking of, fast-moving satellites in close orbits, typically 145 km in radius. Then there is communication via the geostationary satellites. Such satellites are placed in equatorial orbits at a height of approximately 36,000 km. This height gives a satellite the same angular velocity as the earth, as a result of which it appears to be stationary over a fixed spot on the equator. The last of the three is the communication and tracking connected with interplanetary probes.

The ionosphere not only permits long-distance HF propagation; it also affects the propagation of waves through it. Figure 8-15 showed that those waves which were not reflected by the ionosphere did suffer varying degrees of bending away from their original paths. This suggests immediately that frequencies used here will need to be well above normal critical frequencies to minimize their refraction. If this were not done, serious tracking errors and Extraterrestrial Communications difficulties would result of the bending of radio waves. Since refraction becomes insignificant at frequencies above about 100 MHz, while atmospheric absorption is negligible up to about 14 HGz, these two considerations dictate the frequency range used in practice.

A problem encountered in transionospheric propagation is the Faraday effect. This causes the polarization of the radio wave to rotate as it passes through the ionosphere and is a complex process involving the presence of ionized particles and the earth’s magnetic field. As the ion density is variable, so is the Faraday effect upon any particular transmission, and so it is not practicable to calculate its extent and make appropriate allowances. If nothing at all is done, severe trouble will result. For instance, a horizontally polarized antenna will receive virtually no energy from a wave which was horizontally polarized when it left the antenna but has become vertically polarized through rotation in the ionosphere. 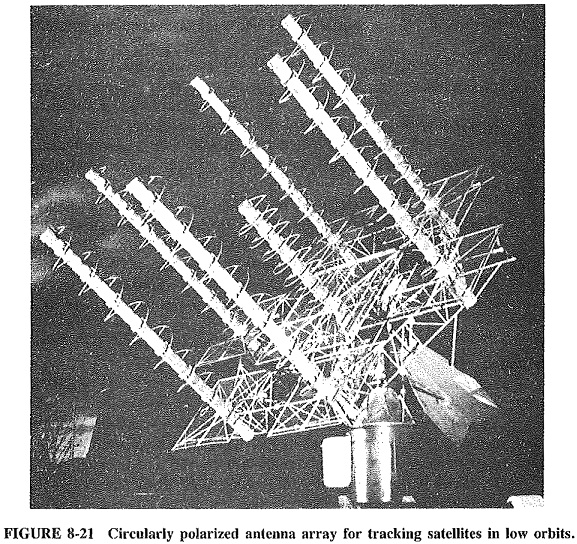 Fortunately, several solutions of the problem are possible. One is to use an antenna with circular polarization, whose polarization is divided evenly between the vertical and horizontal components. Such an antenna is employed for transmission and reception at the ground station. Thus transmissions to and from the satellite may be received satisfactorily, no matter how they have been rotated in the ionosphere. It should be added that such rotation may well exceed 360° at some of the lower frequencies used. Another cure consists in using frequencies above about 1 GHz, at which Faraday rotation is negligible. The present trend for space communications is to frequencies between 1 and 14 GHz partly for the above reason.

The requirements for tracking and communicating with satellites in close orbits involve the use of fast-rotating, circularly polarized antennas, together with fairly low-noise receivers and medium-power transmitters. These are inure or less conventional in design and operate in the allocated frequency band from 138 to 144 MHz. Most of the Extraterrestrial Communications is radio-telemetry since the function of the majority of these satellites is the gathering of scientific and other data. Because these satellites are in low orbits and therefore circumnavigate the earth in about 90 minutes, not only must the ground antennas be capable of fast rotation but also there must be strings of them around the globe because satellites disappear over the horizon in mere minutest.

Tracking interplanetary probes, such as the Pioneer and Voyager probes, is a problem of an entirely different order, especially since the distances involved may be several orders of magnitude greater. When it is considered that Voyager 1- and 2 communicated with the earth from Saturn on a power of 30 W from about 1.5 billion km away, it can be seen immediately that the first requirements here are for huge directional antennas and extremely low-noise receivers. The signal power received by the antennas of NASA’s Deep Space Network was only of the order of 10-17 W. These requirements are identical to those of radio-telescopes, which in fact are sometimes used for tracking deep-space probes.

The antennas used are of a type being parabolic reflectors or horns, with diameters often in excess of 60 m. Since the relative motion of a probe is very slow, only the rotation of the earth need be taken into account. The antennas thus have equatorial mountings (this does not mean that the antenna is located on the equator, but that one of its axes is made parallel to the axis of the earth) with motor drives to keep them pointed at the same spot in the sky as the earth rotates.