The decade counter can be easily incorporated in a commercial test instrument called an electronic counter. A decade counter, by itself, behaves as a totaliser by totalling the pulses applied to it during the time interval that a gate pulse is present. Typical Different Modes of Operation of Electronic Counter are totalising, frequency, period, ratio, time interval and averaging.

In the totalising modes of operation of electronic counter, as shown in Fig. 6.14, the input pulses are counted (totalised) by the decade counter as long as the switch is closed. If the count pulse exceeds the capacity of the decade counter, the overflow indicator is activated and the  counter starts continue again.

If the time interval in which the pulses are being totalised is accurately control­led, the counter operates in the frequency mode. Accurate control of the time interval is achieved by applying a rectangular pulse of known duration to the AND gate, as shown in Fig. 6.15, in place of the dc voltage source.

This tech­nique is referred to as gating the counter. A block diagram of an electronic counter operating in the frequency mode is shown in Fig. 6.15. The frequency of the input signal is computed as

The ratio modes of operation of electronic counter simply displays the numerical value of the ratio of the frequencies of the two signals. 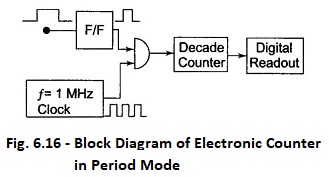 The low frequency signal  is used in place of the clock to provide a gate pulse. The number of cycles of the high frequency signal, which are  stored in the decade counter during the presence of an externally generated gate pulse, is read directly as a ratio of the frequency. A basic circuit for the modes of operation of electronic counter is shown in Fig. 6.16.

In some applications, it is desirable to measure the period of the signal rather than its frequency. Since the period is the reciprocal of the frequency, it can easily be measured by using the input signal as a gating pulse and counting the clock pulses, as shown in Fig. 6.16.

The time interval mode of operation meas­ures the time elapsed between two events. The measurement can be done using the cir­cuit of Fig. 6.17. 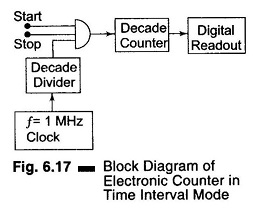 Electronic counters find many applications in research and development laboratories, in standard laboratories, on service benches and in everyday operations of many electronics installations.