Motoring Control : A transistor Chopper Control of Separately Excited DC Motor drive is shown in Fig. 5.41(a). Transistor Tr is operated periodically with period T and remains on for a duration ton. Present day choppers operate at a frequency which is high enough to ensure continuous conduction. Waveforms of motor terminal voltage va and armature current ia for continuous conduction are shown in Fig. 5.41(b). During on-period of the transistor, 0 ≤ t ≤ ton, the motor terminal voltage is V.

The operation is described by

In this interval, armature current increases from ial to ia2. Since motor is connected to the source during this interval, it is called Duty Interval.

At t = ton, Tr is turned-off. Motor current freewheels through diode DF and motor terminal voltage is zero during interval ton ≤ t ≤ T. Motor operation during this interval, known as freewheeling interval, is described by

Motor current decreases from ia2 to ia1 during this interval.

The nature of speed torque characteristic is shown in Fig. 5.43.

Chopper Control of Separately Excited DC Motor for regenerative braking operation is shown in Fig. 5.42(a). Transistor Tr is operated periodically with a period T and on-period of ton. Waveforms of motor terminal voltage va and armature current ia for continuous conduction are shown in Fig. 5.42(b). Usually an external inductance is added to increase the value of La. When Tr is on, ia increase from ia1 to ia2.

The mechanical energy converted into electrical by the motor, now working as a generator, partly increases the stored magnetic energy in armature circuit inductance and remainder is dissipated in armature resistance and transistor. When Tr is turned off, armature current flows through diode D and source V, and reduces from ia2 to ia1. The stored electromagnetic energy and energy supplied by machine is fed to the source. The interval 0 ≤ t ≤ ton is now called energy storage interval and interval ton ≤ t ≤ T the duty interval. If δ is again defined as the ratio of duty interval to period T, then

Since la has reversed

The nature of speed torque characteristic is shown in Fig. 5.43. 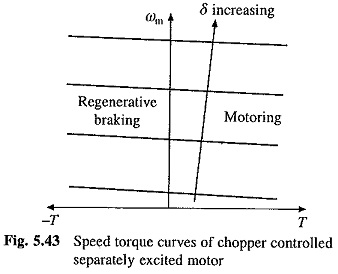 In servo drives where fast transition from motoring to braking and vice versa is required, both Trl and Tr2 are controlled simultaneously. In a period T,Trl is given gate drive from 0 to δT and Tr2 is given gate drive from δT to T, where δ is the duty ratio for Trl. Therefore, from 0 to δT motor is connected to source either through Trl or D2 depending on whether the motor current ia is positive or negative. Since V > E, during this period the rate of change of current is always positive. Similarly from δT to T, motor armature is shorted either through D1 or Tr2 depending on whether ia is positive or negative and during this period rate of change of current is always negative. Motor terminal voltage and current waveforms are shown in Fig. 5.44 (b). 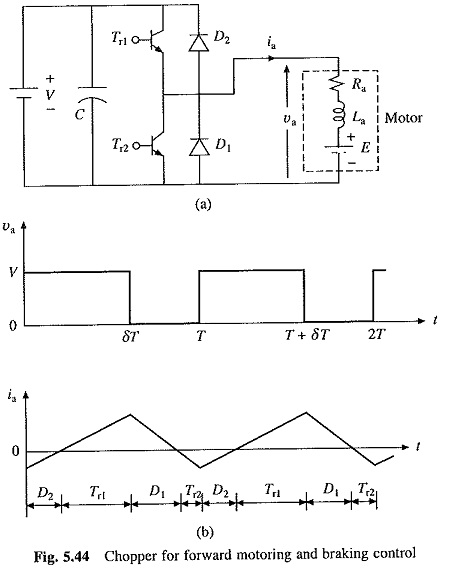 Dynamic braking circuit and its waveforms are shown in Fig. 5.45. During the interval 0 ≤ t ≤ ton, ia increases from ia1 to ia2. A part of generated energy is stored in inductance and rest is dissipated in Ra and Tr. During interval ton ≤ t ≤ T, ia decreases from ia2 to ia2. The energies generated and stored in inductance are dissipated in braking resistance RB, Ra and diode D. Transistor Tr controls the magnitude of energy dissipated in RB, and therefore, controls its effective value.

If ia is assumed to be rippleless dc, then energy consumed EN by RB during a cycle of chopper operation is

Equation (5.122) shows that the effective value of braking resistor can be changed steplessly from 0 to RB as δ is controlled from 1 to 0. As the speed falls, δ can be increased steplessly to brake the motor at a constant maximum torque as shown in Fig. 5.8 by chain-dotted line.