Separately Excited DC Motor for Dynamic Analysis – The DC machines are quite versatile and are capable of giving a variety of V-A and speed-torque characteristics by suitable combinations of various field windings. With solid-state controls their speeds and outputs can be controlled easily over a wide range for both dynamic and steady-state operation. By addition of the feedback circuit, the machine characteristics can be further modified. The aim of this section is to study dc machines with reference to their dynamic characteristics.

For illustration, let us consider the separately excited dc machine shown schematically in Fig. 7.68. For ease of analysis, the following assumptions are made:

The two inductance parameters appearing in Fig. 7.68 are defined below:

Mutual inductance (between field and armature) = 0; because the two are in space quadrature.

Further for Separately Excited DC Motor for Dynamic Analysis it is convenient to use speed in rad/s rather than rpm.

Similarly for the field circuit,

For motoring operation, the Separately Excited DC Motor for Dynamic Analysis for the mechanical system is

J = moment of inertia of motor and load in Nms2

Energy storage is associated with the magnetic fields produced by if and ia and with the kinetic energy of the rotating parts. The above equations are a set of nonlinear (because of products if(t)ωm and if(t)ia(t) state equations with state variables if, ia and ωm. The solution has to be obtained numerically.

In the simple linear case of motor response to changes in armature voltage, it is assumed that the field voltage is constant and steady-state is existing on the field circuit, i.e. If = constant. Equations (7.98), (7.100) and (7.101) now become linear as given below

These equations can be reorganized as

From Eqs (7.106)—(7.108), the block diagram of the motor can be drawn as in Fig. 7.69. It is a second-order feedback system with an oscillatory response in general. It is reduced to simple first-order system, if La and therefore τa is neglected.

The qualitative explanation for the voltage build-up process in a shunt generator has already been discussed. Here the mathematical treatment of this problem will be given, which in fact boils down to the solution of a nonlinear differential equation.

Referring to Fig. 7.70 it is seen that for any field current the intercept ab, between the OCC and the Rf-line gives the voltage drop caused by the rate of change of Φf and the intercept bc gives the drop in the field resistance. The two together balance out the generated emf ea (neglecting ifRa, the armature drop). Thus 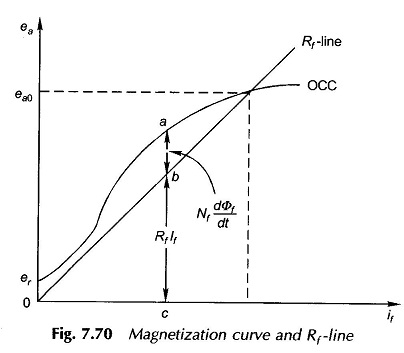 The field flux Φf is greater than the direct axis air-gap flux Φd because of leakage.

Here σ is known as the coefficient of dispersion.

Multiplying numerator and denominator by NfPag

Pag is the permeance of the air-gap/pole

It is easily recognized that the numerator is the unsaturated value of field inductance, Lf, and the denominator is the slope of the air-gap line. Both are constants. Hence, 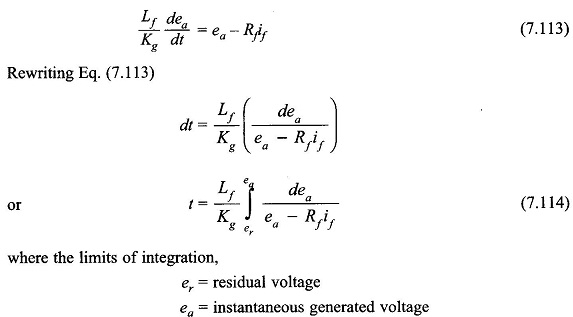 This integral can be evaluated graphically by summing up the areas on a plot of 1/(ea – Rf if) against ea. This approach is employed to plot ea against time. The theoretical time needed for the generated emf to attain the no-load value, ea0 would be infinite; hence in practice the time needed to reach 0.95 ea0 is taken as the time needed to reach ea0. The variation of ea with time is plotted in Fig. 7.71.

The response is rather sluggish since only small voltage differences (= ea – Rfif) contribute to the flux build-up (Φf). 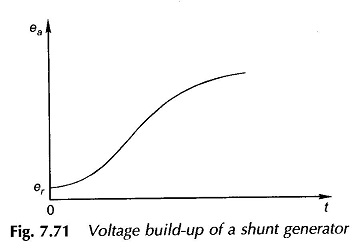