In general, the mechanical time-constant for any machine is much larger than the electrical time constant. Therefore, the Dynamic Modelling of Induction Motor can be simplified by neglecting the electrical transient without any loss of accuracy of results.

The circuit model of Induction motor holds for constant slip but would also apply for slowly varying slip as is generally the case in motor starting. Figure 9.64 shows the typical torque-slip (speed) characteristic of a Dynamic Modelling of Induction Motor and also the load torque as a function of slip (speed). Each point on (TL-s) characteristic represents the torque (frictional) demanded by the load and motor when running at steady speed. The motor would start only if T > TL and would reach a steady operating speed of ω0 which corresponds to T = TL, i.e. the intersection point P of the two torque-speed characteristics. It can be checked by the perturbation method that P is a stable operating point for the load-speed characteristic shown. If for any reason the speed becomes more than ω0, (T – TL) < 0 the machine-load combination decelerates and returns to the operating point. The reverse happens if the speed decreases below ω0. 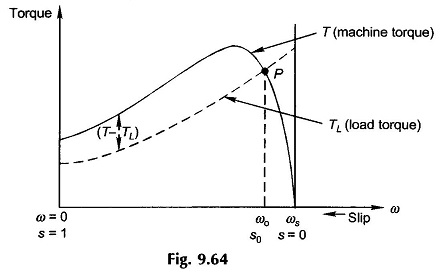 During the accelerating period

where J = combined inertia of motor and load. Now 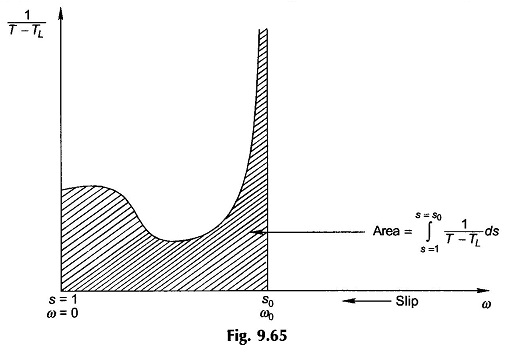 Since 1/(T – TL) becomes ∞ at s0, the practical integration is carried out only up to 90 or 95% of s0 depending upon the desired accuracy. 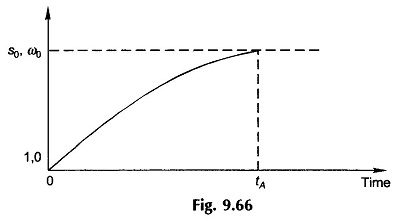 Figure 9.66 shows how slip (speed) varies with time during the acceleration period reaching the steady value of s0(ω0) in time tA, the accelerating time. Because of the nonlinearity of (T – TL) as function of slip, the slip (speed)-time curve of Fig. 9.66 is not exponential.

In this particular case it is assumed that the machine and load friction torque TL = 0.

Since TL is assumed to be zero, the motor torque itself is the accelerating torque,

To find the optimum value of smax,T for the Dynamic Modelling of Induction Motor to have minimum acceleration time to reach s2 from s1, Eq. (9.96) must be differentiated with respect to smax,T and equated to zero. This gives

For minimum acceleration time for the machine to reach any slip s from start, the optimum value of smax,T is given by Eq. (9.98) with s1 = 1 and s2 = s. Then

Further, to enable us to compute the optimum value of the rotor resistance to accelerate the machine to slip s2 from s1, Eq. (9.98) is substituted in Eq. (9.92) giving