By reducing Stator Voltage Control of Induction Motor, speed of a high-slip induction motor can be reduced by an amount which is sufficient for the speed control of some fan and pump drives (Fig. 6.31). While torque is proportional to voltage squared (Eq. (6.10)), current is proportional to voltage (Eq. (6.4)). Therefore, as voltage is reduced to reduce speed, for the same current motor develops lower torque. Consequently, method is suitable for applications where torque demand reduces with speed, which points towards its suitability for fan and pump drives. 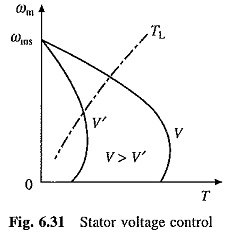 If stator copper loss, core loss, and friction and windage loss are ignored, then from eqns (6.5) and (6.7), motor efficiency η is given by

The equation shows that the efficiency falls with decrease in speed. The speed control is essentially obtained by dissipating a portion of rotor input power in rotor resistance. Thus, not only the efficiency is low, the power dissipation occurs in the rotor itself, which may overheat the rotor. Because of these reasons, this drive is employed in fan and pump drives of low power rating and for narrow speed range.

Domestic fan motors, which are always single-phase, are controlled by a single-phase triac voltage controller (Fig. 6.32(a)). Speed control is obtained by varying firing angle of the triac. These controllers, commonly known as solid state fan regulators, are now preferred over conventional variable resistance regulators because of higher efficiency. Industrial fans and pumps are usually driven by three-phase motors.

Fig. 7.32(b) shows a commonly used thyristor voltage controller for speed control of 3-phase motors. Motor may be connected in star or delta. In delta connection, third harmonic voltage produced by motor back emf causes circulating current through the windings which increases losses and thermal loading of motor. Speed control is obtained by varying conduction period of thyristors. For low power ratings, anti-paralleled thyristor pair in each phase can be replaced by a triac. 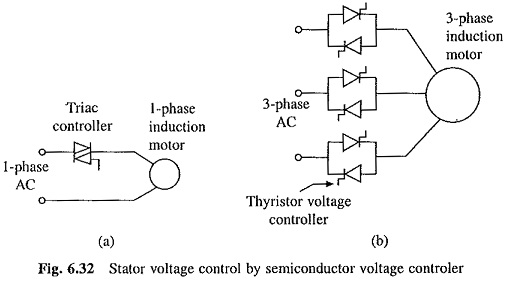 Since Stator Voltage Control of Induction Motor, both single- and three-phase, allow a stepless control of voltage from its zero value, they are also used for soft start of motors.

The power factor of an ac regulator is defined by eqn. (5.109). With increase in firing angle, both distortion factor and displacement factor reduce, giving a low power factor.

In fan and pump drives, the fluid flow has to be maintained constant against variations in pressure head and nature of pumped fluid. Therefore, it is always operated with closed-loop speed control. For closed-loop control, scheme of Fig. 3.5, consisting of inner current loop and outer speed loop is used. Braking is not used because fluid pressure provides adequate braking torque.