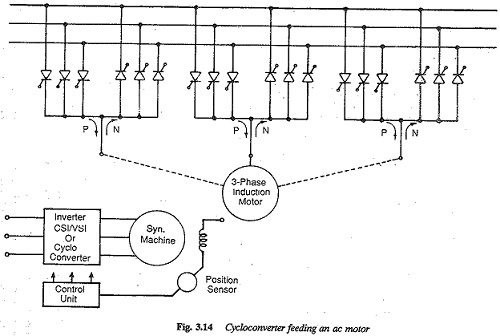 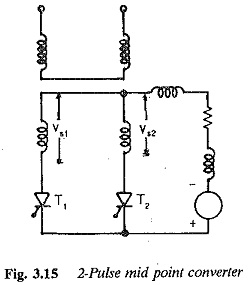 The branch which has a higher voltage with respect to the midpoint can be made to conduct by giving a firing pulse to the thyristor in that branch. The midpoint of the secondary serves as the return for the current. The thyristor T1 can be fired when υs1 is positive and T2 can be fired when υs2 is positive with respect to the midpoint. The thyristor conducts the load current when its voltage is positive, once it is turned ON. The output voltage and cur­rent waveforms, assuming a highly inductive load are given in Fig. 3.16. If a thyristor, say T1 is switched ON when the voltage is positive the current through the load builds up. T1 maintains conduction, depending upon the nature of the load, even in the period when υs1 is negative. At this stage υs2 becomes positive and thyristor T2 takes over if a firing pulse is given. Assum­ing instantaneous commutation, performance, equations of the converter can be derived. Assuming a turns ratio of unity for the transformer and neglecting the commutation reactances, the average voltage at the dc terminals of a Two pulse mid point converter can be derived as

where α is the firing angle of the converter. For firing delay angles in the range 0 to 90° the converter operates as a rectifier providing dc voltage at the load. Power transfer takes place from ac to dc. For angles in the range 90° to 180° (theoretically) the converter operates in the inverting mode. If there is a dc source on the dc side, dc power can be converted to ac. However, in practice a firing angle of 180° cannot be reached due to overlap and the finite amount of time taken by the thyristor to go to a blocking state. 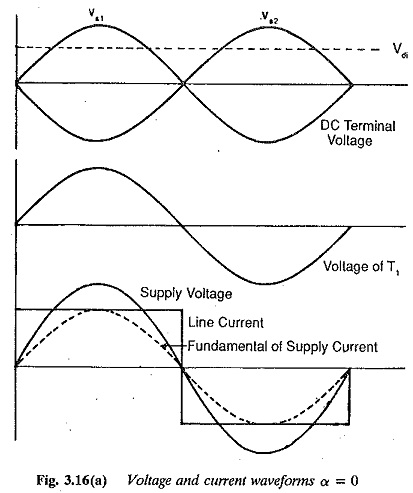 The average dc voltage is maximum at a firing angle of 0°, It decreases as the firing angle changes from 0 to 90°, and finally becomes zero when the firing angle is 90°. The voltage reverses its polarity for firing angles greater than 90° and increases with reversed polarity as a is increased beyond 90°. It reaches its maximum negative value at α = 180° (Fig. 3.17).

The average value of the thyristor current

The rms value of the thyristor current

Using these values of voltages and currents the ratings of the converter trans-former can be obtained. The rating of the secondary winding is

The design rating of the transformer is 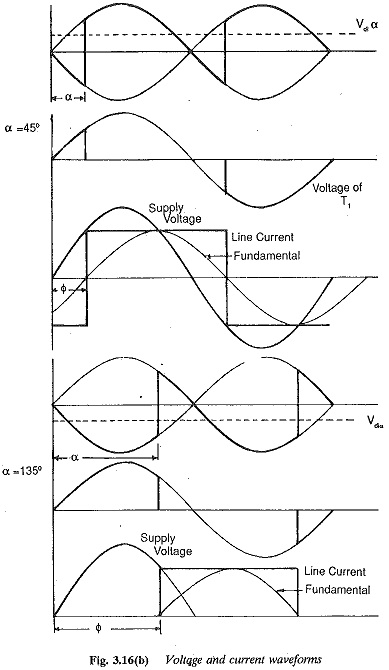 The design rating of transformer is

The increased rating of the transformers is due to the dc component of the current. 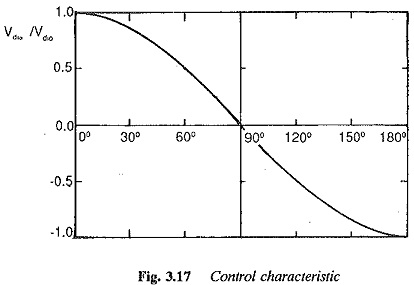 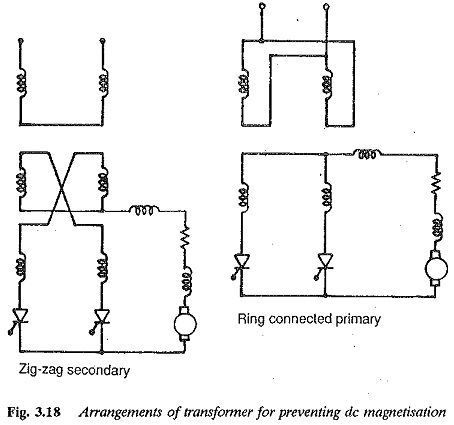 The peak forward or reverse voltages applied to the thyristors are

The premagnetisation of the transformer existing in the circuit of Fig. 3.15 can be avoided by the ring connection of the transformer shown in Fig. 3.18. Overlap the current through the load builds up when a thyristor is turned ON and the voltage across it is positive. Say, for example, T1 is fired when Vs1 is positive. T1 maintains its conduction till the next thyristor is fired at any instant during its positive voltage. Vs2 becomes positive when Vs1 becomes negative. Thyristor T2 is fired. The current transfer takes place from T1 to T2 The preceding discussion has assumed instantaneous commutation. But in practice, due to the leakage reactance of the transformer, and the line inductances and additional inductances of the circuit (to protect the thyristors from di/dt), the transfer of current is never instantaneous, but takes a definite amount of time. During commutation both the thyristors conduct. The current of the outgoing thyristor decreases and that of the incoming one increases. The process is complete when all the current has been transferred to the incoming thyristor. The angle of overlap is denoted by u. The voltage and current wave forms of the converter, taking overlap into consideration, are shown in Fig. 3.19.

The effect of overlap is to cause a kind of voltage drop at the output terminals. The average value of the dc voltage at the dc terminals of the converter is 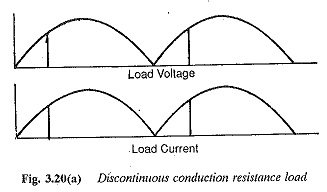 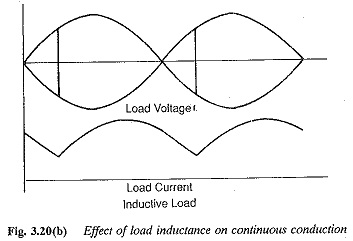 A smoothing inductance is necessary in the load circuit. This inductance serves two purposes:

α firing angle at which the smoothing is required

The performance of a converter is also characterised by harmonic currents on the ac side. The harmonic components present on the ac side do not contribute to any power transfer. On the other hand, they cause undesirable effects in converter operation and also reduce the power factor markedly. They may cause resonance effects due to the line inductance and capacitance. When overlap is neglected, the rms value of the harmonic current referred to the fundamental is

For a single phase

When the overlap μ is taken into consideration

The effect of overlap is to reduce the distortion on the ac side and decrease the rms value of a harmonic.

For a Two pulse mid point converter, g = 0.9. The harmonics therefore effectively de­crease the pf even though they do not contribute to power transfer.

where uo is the overlap angle at α = 0°. It can be shown that the reactive power required by the converter at a given firing angle α is