Four Quadrants Converters – The converters described in the previous sections are suitable either for one quadrant or two quadrant operation. In the former case stepless speed control is possible by changing the applied voltage. There is no regeneration. In the latter case both speed control and regeneration are possible. The converter operates in the inversion mode as well. The sign of the dc voltage changes and the current direction is specified by the thyristor. Operation is possible in the neighbouring quadrant in the V-I plane (speed—torque plane). The converter fed drive has regeneration capability. 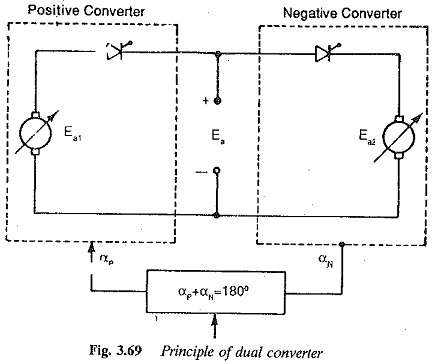 A dual converter can be realised by either an antiparallel connection of two 2 quadrant converters or a cross connection. Figures 3.70 (a) and 3.71 (a) show the two possible connections of 3-pulse controlled rectifiers. Depending upon the current direction, either converter I or converter II feeds the current to the dc motor. 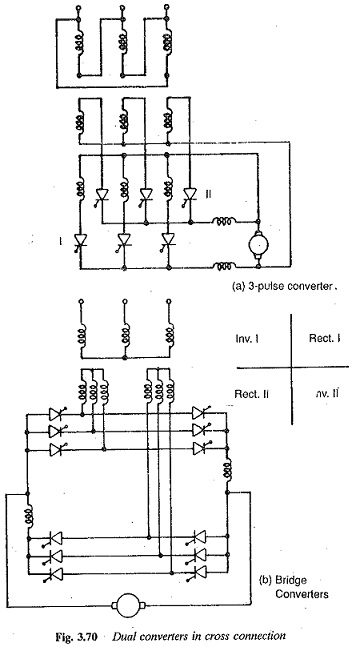 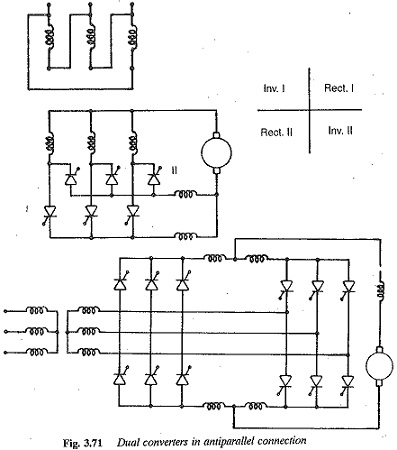 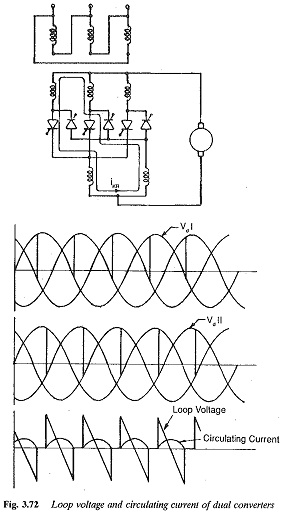 Bridge circuits in an antiparallel connection forming a dual converter are shown in Fig. 3.71(b). This requires four current limiting reactors of large size and a circulating current having three pulses is established. This has a disadvantage with regard to its control circuit and hence is rarely used. 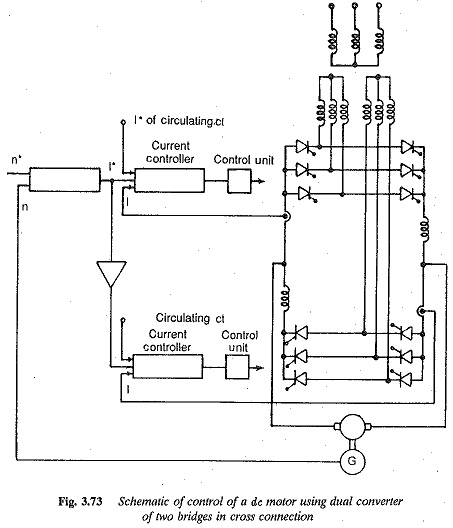 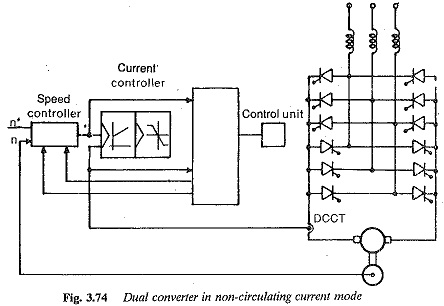 A dual converter can also be operated in a non-circulating current mode. The converter shown in Fig. 3.74 is made up of bridge converters in an an­tiparallel connection. The control logic should be such that at any instant only one converter conducts and the firing pulses to the other are blocked. The control circuit needs to be more sophisticated. The change over from one converter to the other takes place in the following way:

1.The sign change is provided at the output of the speed controller.

2.The speed controller is blocked by limiting the output voltage. The current controller is separated from the control circuit. The firing pulses are retarded to the inverter limit for the rapid building up of

3.The zero crossing of the current is detected and the pulses of the con­ducting converter are blocked.

4.The control circuit is again connected to the current controller. Control pulses to the converter and limiting of speed controller will be for the new direction of rotation.

There should be a time lag of 3 ms for change over to occur, because simultaneous conduction of the converters must be avoided. A single control circuit and one smoothing inductance are sufficient. The latter can be small in size, if the armature inductance is large. A transformer can be dispensed with if the supply voltage is employed directly. The control circuit needs further refinement in case discontinuous conduction takes place.