Types of Electrical Drives has the following major parts: load, motor, power modulator, control unit and source. There are large number of loads and each load has its own specific requirements. Some common aspects to loads are discussed and specific requirements of some common loads in later chapters. Here we examine four Types of Electrical Drives; viz. motors, power modulators, sources and control unit.

In the past, induction and synchronous motors were employed mainly in constant speed drives. Variable speed drives consisting these machines were either too expensive or had very poor efficiency. Consequently, variable speed drive applications were dominated by dc motors.

Because of numerous advantages of ac motors described above, ac drives have succeeded in replacing dc drives in a number of variable speed applications.

Brushless dc motor is somewhat similar to a permanent magnet synchronous motor, but has lower cost and requires simpler and cheaper converter. It is being considered for low power high speed drives and for servo applications, as an alternative to dc servo motor which has been very popular so far. The dc servo motor motor has all the disadvantages of commutator and brushes listed above. At low power levels, the coulomb friction between the brushes and commutator is objectionable, as it adversely affects the steady state accuracy of the drive.

It is difficult to classify power modulators. A somewhat satisfactory classification is:

(b) Variable impedances and

Some drives may employ more than one of these modulators. Those power modulators which are employed in industrial drives will be discussed.

When a power modulator performs function (iii) (see Sec. 1.1), it can be classified as converter. Usually, a converter also performs function (i) in addition to (ii). Depending on the circuit, it may also be able to perform function (iv) of the power modulator. Need for a converter arises when nature of the available electrical power is different than what is required for the motor. Power sources are usually of the following types: 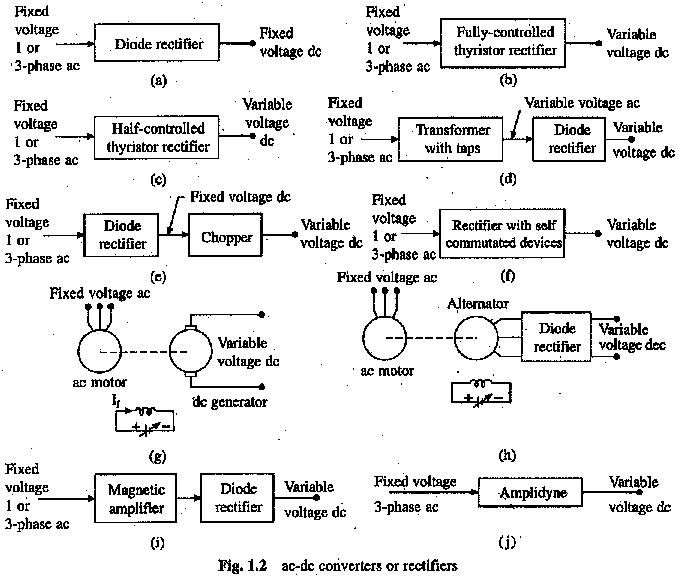 The output voltage in converter 1.2(d) is changed by applying mecha­nical force. Few discrete steps of dc voltage can only be obtained. In converter of Fig. 1.2(e) output voltage can be varied steplessly by controlling the duty ratio of semiconductor devices of the chopper by low power electrical signals from a control unit. The converter of Fig. 1.2(0 is a controlled rectifier employing self-commutated device such as power transistors, IGHTs and GTOs. It can be a single or two quadrant converter depending on the circuit. When connected in antiparallel, converters of Figs. 2(b) and (f) can provide four quadrant operation (variable voltage and current of either polarity). In ac to dc converter of Fig. 1.2(g),. the output voltage can be controlled by controlling field current of the generator from a control unit (amplifier) of higher power level than the control units of converters of Figs. 1.2(b), (c), (e) and (0. This can operate in all four quadrants. Because of the two rotating machines, it has a number of disadvantages: bulky, heavy, noisy, less efficient, slow response, expensive and requires special foundation. Disadvantages associated with commutator and brushes of file dc generator (Fig. 1.2(g)) are removed in converter of Fig: 1.2(h). However, this converter can operate in a single quadrant only. Some very old equipments may also employ ac to dc converter of Figs. 1.2(i) and (j) employing magnetic amplifier and amplidyne respectively. Magnetic amplifiers and amplidynes are controlled from low power dc signals. 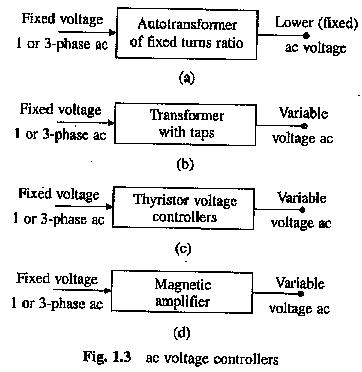 They are used to get variable voltage dc from a fixed voltage dc and are designed using semiconductor devices such as power transistors, IGBTs, GTOs, power MOSFETs and thyristors. Output voltage can be varied steplessly by controlling the duty ratio of the device by low power signals from a control unit.

Inverters are employed to get a variable frequency as supply from a dc supply. Stepped-wave inverters of Fig. 1.5(a) can be designed to behave as voltage source or current source. Accordingly they are known as voltage source or current source inverters. For the control of ac motor, voltage/current should also be controlled along with frequency. Variation in output voltage/current can be achieved by varying the input dc voltage. This is achieved either by interposing a chopper in between fixed voltage dc source and the inverter or the inverter may be fed from an ac-dc converter from among those of Figs. 1.2(b), (c) or (f). Output voltage and current have stepped waveform, consequently they have substantial amount of harmonics. Variable frequency and variable voltage ac is directly obtained from fixed voltage dc when the inverter is controlled by pulse-width modulation (PWM) (Fig. 1.5(b)). The PWM control also reduces harmonics in the output voltage. Inverters are built using semiconductor devices such as thyristors, power transistors, IGBTs, GTOs and power MOSFETs.. They are controlled by, firing pulses obtained from a low power control unit. In the past variable frequency supply used to be obtained from a frequency changer employing a rotating machine. Such schemes have become outdated due to numerous disadvantages. 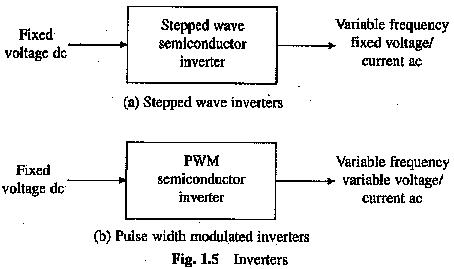 Cycloconverter (Fig. 1.6) converts fixed voltage and frequency ac to variable voltage and variable frequency ac. They are built using thyristors and are controlled by firing signals derived from a low power control unit. Output frequency is restricted to 40% of supply frequency in order to keep harmonics in the output voltage and source current within acceptable limits.

Switching operations are required to achieve any one of the following: (i) for changing motor connections to change its quadrant of operation, (ii) for changing motor circuit parameters in discrete steps for automatic starting and braking control, (iii) for operating motors and drives according to a predetermined sequence, (iv) to provide interlocking to prevent maloperation and (v) to disconnect motor when abnormal operating conditions occur.

Switching operations in motor’s power circuit are carried out by high power electromagnetic relays known as contactors. Recently attempts have been made to use thyristor switches. Thyristor switches have disadvantages that they cannot provide perfect isolation between the source and motor circuit. Consequently, contactors continue to be widely used. Switching operation based on load’s particular position is implemented using limit switches.

In India 1-phase and 3-phase 50 Hz ac supplies are readily available in most locations. Very low power drives are generally fed from 1-phase source. Rest of the drives are powered from 3-phase source; except in the case of traction drives where even at very high power levels, 1-phase supply is used because of economy. Most drives are powered from ac source either directly or through a converter link. When fed directly from 50 Hz ac supply, maximum speeds of induction and synchronous motors are limited to 3000 rpm. For higher speeds, conversion to higher frequency supply becomes mandatory. Low and medium power motors (tens of kilowatts) are generally fed from 400 V supply; for high ratings, motors may be rated at 3.3 kV, 6.6 kV, 11 kV and higher.

In case of aircraft and space applications, 400 Hz ac supply is generally used to achieve high power to weight ratio for motors.

In main line traction a high voltage supply is preferred because of economy. In India 25 kV, 50 Hz supply is employed. In underground traction major expenditure is cost of the tunnel which should be minimised by keeping its cross-section just enough for the train. Consequently, clearance between live conductor and the earth has also to be minimum. In view of this, underground traction systems employ a low voltage (500 to 750 V) dc supply. In Western India (Bombay to Igatpuri) 1500 V dc is used for main line and the suburban traction which is uneconomical, and therefore, future installations will not use it.

Some drives are powered from a battery, e.g. fork lift trucks and milk vans. Depending on size, battery voltage may have typical values of 6 y, 12 V, 24 V, 48 V and 110 V dc. Another example of drives fed from a low voltage dc supply is solar powered drives used in space and water pumping applications. These drives, though presently very expensive have a great future for rural water pumping and low power transport applications.

When semiconductor converters are used, the control unit will consists of firing circuits, which employ linear and digital integrated circuits and transistors, and a microprocessor when sophisticated control is required. When control of switching circuits is required for any of the purpose described in Sec. 1.3.2(c), function of control unit will be to provide sequencing and interlocking. As already stated, solid state relays are used and when control is complex programmable logic controllers (PLCs) can be used.