A power converter acts as an interface which accepts electric power from the existing source and converts it in a controlled manner into a suitable form compatible with the particular load or the process for which it  is used. The main sources for electric power are: 1 ph or 3 ph 50/60 Hz ac from utility systems and dc from batteries or solar cells. The four basic forms ac/ac dc/dc of power conversion required (Fig. 11.1) are: ac to dc, dc to dc, dc to ac and ac to ac. One important example where power conversion is required is dc/ac variable speed motor drives with variable voltage/variable frequency. 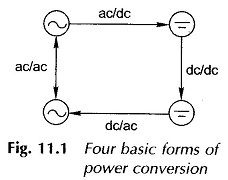 The modern Static Power Converters are compact, cheap, reliable, durable, flexible, completely controllable. They need reduced maintenance too. They are suitable for all the four basic forms of power conversion mentioned above through rectifiers (ac/dc), choppers (dc/dc), inverters (dc/ac) and cycloconverters or ac regulators (ac/ac). These are now conditioning electric power to meet the requirements in the industry at all levels.

Currently ac drives are in the process of replacing dc drives in many industrial applications including locomotion, machine tool drives, paper mills, electric vehicles, waste water treatment, air conditioning, and host of other applications. About 70% of the cost of an ac drive is contained in the power electronics portion of the drives versus only about 30% for the dc drive. But, technology is on the side of the ac drive and they are expected to overtake dc drives in most of the industrial applications as the technology continues to advance and mature.

The control of speed-torque characteristics of motors for adjustable speed drive was already discussed. It was discovered that the speed of a dc motor can be controlled with the relative ease as compared to ac motors. The speed of a dc motor is controllable by the flux/pole (field control) as well as by the armature voltage. A wide range of speed is obtained by a combination of these methods. Speeds below the base speed are achieved by reducing the armature voltage while the field is kept at its maximum setting. A constant-torque load (torque corresponding to rated armature current and full field current) can be met with the load power being directly proportional to motor speed. For speeds above the base value, the armature voltage is held at constant value and the field is weakened. In this region, the torque decreases in proportion to the increase in speed and therefore the mechanical power output above the rated speed remains constant. Typical speed ranges for dc drives are 6 : 1 by armature voltage control and 3 : 1 by a field weakening control. Armature voltage control requires a power converter with adjustable voltage and capability to handle rated armature current. The speed range of a dc motor cannot be increased beyond the range mentioned as it is limited by extreme distortion of the air-gap flux of a weak field caused by the armature reaction and consequent poor commutation.

The complex constructional features of dc armature also place an upper limit on the motor speed. Neither of these two limiting factors inhibit the speed of a rugged wound rotor induction motor. On the other hand, ac motors suffer from the inherent speed-constancy of the rotating field dictated by the supply frequency. Speed control in induction motors is possible from the stator side by frequency control with a rotating field flux kept constant by simultaneous variation of V such that V/f remains constant. Constant V/f supply for this control requires expensive frequency changers (Static Power Converters). The stator voltage control (fixed frequency) is ruled out except for small motors because the motor torque reduces as the square of the voltage and the motor cannot meet the load torque at low or even medium speeds. Further, the motor has to be derated to avoid overheating at low speeds. The control of speed from the rotor side is only possible for the more expensive and less rugged wound-rotor induction motor. The rotor-resistance control is too inefficient for practical use except for momentary reduction of speed. Exotic frequency changers must, therefore, be introduced in the rotor circuit for efficient control linking variable-frequency rotor to the constant-frequency supply while being capable of handling the full rotor current. The speed of a synchronous motor can be controlled by combined voltage and frequency control only. It must also be recorded here that very high speeds are only possible by using ac motors because of the inherent limitations of dc motors mentioned earlier.

It has been seen in the above discussion that speed control of both dc and ac drives requires Static Power Converters—ac to dc conversion for dc drives and ac to ac conversion, with one side having a variable frequency constant V/f for ac drives. Ac to ac power conversion normally requires an intermediate dc stage, i.e. the ac power is first converted to dc form which is then converted to a variable-frequency form.

Before the advent of static power switching devices—silicon rectifiers and silicon controlled rectifiers (SCRs) or thyristors—power conversion necessitated the use of expensive rotating machines. Motor-generator (MG) sets were used for ac to dc conversion and ac to ac conversion required an even more elaborate and expensive rotating machine set and in fact was rarely employed. Even then a stringent upper limit existed for the high frequency end of the variable-frequency conversion imposed by high specific iron-loss.

With the availability of SCRs (thyristors) beginning in late 1950’s, followed by development of other power semiconductor devices having features superior to SCRs in some respects, their commercial introduction in 1970’s and with ever-increasing voltage, current and operating frequency rating of SCRs and other power devices coupled with simultaneous reduction in their cost, a virtual revolution has taken place in the field of Static Power Converters. Power ratings and speed limitation are now determined by electric motors rather than semiconductor devices. In future large chunks of all power reaching industrial end-use equipment and domestic lighting and gadgetry would have passed through power semiconductor devices; once and even more than once. This is visualized to be the future trend as is already witnessed in most of the advanced countries.

Along with improvement in characteristics of power switching devices, considerable ingenuity has been acquired in design and layout of associated circuitry. At present the bulk of size and cost of a power electronic equipment is due to passive components. Search is on for “silicon solution” for these, like the use of resonant and quasi-resonant link principle.

The power electronics systems today incorporate power semiconductor devices as well as microelectronics IC’s, both of which are digital in nature (one provides the muscle and the other gives the intelligence). The ultimate goal of R&D is to put all the silicon on one chip.