Half Wave Rectifier with Capacitor Filter:

Half Wave Rectifier with Capacitor Filter – When a sinusoidal alternating voltage is rectified, the resultant waveform is a series of positive (or negative) half-cycles of the input waveform; it is not direct voltage. To convert to direct voltage (dc), a smoothing circuit or filter must be employed.

Figure 3-7(a) shows a Half Wave Rectifier with Capacitor Filter (C1) and a load resistor (RL). The capacitor, termed a reservoir capacitor, is charged almost to the peak level of the circuit input voltage when the diode is forward biased. This occurs at Vpi as shown in Fig. 3-7(b), giving a peak capacitor voltage, 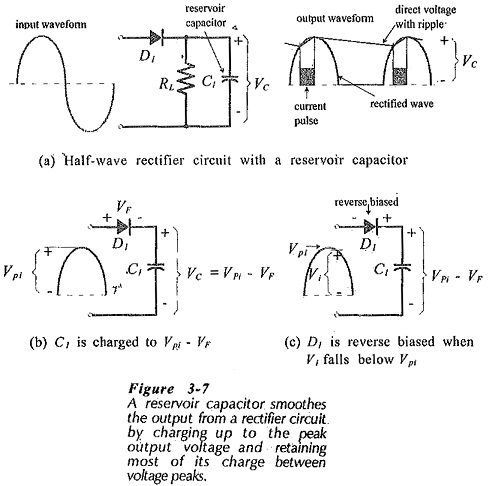 The amplitude of the ripple voltage is affected by the load current, the reservoir capacitor value, and the capacitor discharge time. The discharge time depends upon the frequency of the ripple waveform, which is the same as the ac input frequency in the case of a Half Wave Rectifier with Capacitor Filter. With a constant load current, the ripple amplitude is inversely proportional to the capacitance; the largest capacitance produces the smallest ripple.

The capacitance for the reservoir capacitor can be calculated from the load current, the acceptable ripple amplitude, and the capacitor discharge time. Consider the circuit output voltage waveform illustrated in Fig. 3-8(a).

The waveform quantities are: 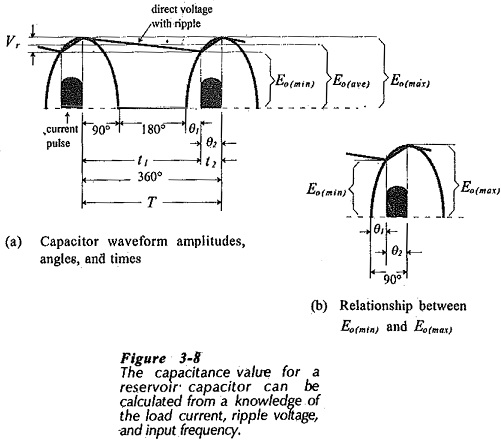 Figure 3-8(b) shows that, because the input wave is sinusoidal,

The time period is,

where f is the frequency of the ac input waveform.

During T, the input waveform goes through a 360° phase angle, which gives the time per degree as,

Taking the current as a constant quantity,

When a capacitance value is calculated, an appropriate capacitor has to be selected from a manufacturer’s list of available standard values. With a reservoir capacitor, the calculated capacitance is always the minimum value required to give a specified maximum ripple voltage amplitude. If a larger-than-calculated capacitance is used, the ripple voltage will be lower than the specified maximum. So, a larger standard value capacitor is always selected in the case of a reservoir capacitor.

The standard-value capacitors are typically available with +20% tolerance. In the case of capacitors greater than 10 pF, the tolerance is often listed as -10% +50%. This means that a 100 μF capacitor might have a capacitance as low as 90 μF, or as high as 150 μF. In most circuit situations, a minimum capacitance value is calculated, and a larger value is quite acceptable. 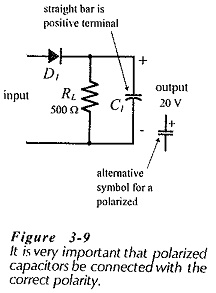 Another approximation that can be made to simplify the capacitance calculation is to take the discharge time (t1) as equal to the input waveform time period (T), [see Fig. 3-8(a)].

Equation 3-12 assumes that the capacitor charging time (t2) is so much smaller than t1 that it can be neglected. This is a reasonable assumption where the ripple voltage is small. Also, use of Eq. 3-12 gives a larger capacitance value than the more precise calculation, and this is acceptable because a larger-than-calculated standard value capacitor is normally selected.

Rectifier diodes must be specified in terms of the currents and voltages that they are subjected to. The calculated levels are normally minimum quantities, and the selected diodes must be able to survive higher levels. 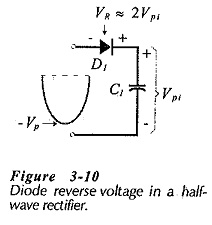 Consider Fig. 3-10 which illustrates the situation when the ac input wave is at its negative peak voltage (-Vp). The capacitor has already been charged up to approximately the positive peak level of the input (+Vp). Consequently, the diode has -Vp at its, anode and +Vp at its cathode, so the diode peak reverse voltage is,

The average forward rectified current (IF(av)) that the diode must pass is equal to the dc output current.

The diode in a half-wave rectifier circuit with a reservoir capacitor does not conduct continuously, but repeatedly passes pulses of current to recharge the capacitor each time the diode becomes forward biased. This is illustrated in Fig. 3-8 and again in Fig. 3-­11. 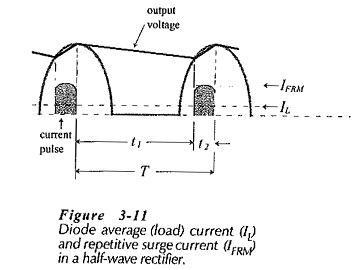 The current pulse is known as the repetitive surge current, and is designated (IFRM). The average input current to the rectifier circuit must equal the average load current (IL), so IFRM averaged over time period T equals IL . (see Fig. 3-11)

Figure 3-12 shows a half-wave rectifier circuit with a resistor (RS) connected in series with the diode. This is a low-resistance component known as a surge limiting resistor. As its name suggests, the purpose of RS is to limit the level of any surge current that might pass through the diode. The highest surge current occurs when the ac supply is first switched on to the rectifier circuit. Before switch-on, the reservoir capacitor normally contains no charge, so it behaves as a short-circuit at the instant of switch-on. If switch-on occurs when the ac input is at its peak level, the surge current is, 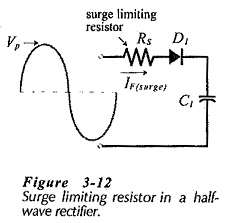 For a diode with a specified maximum non-repetitive surge current (IFSM), the surge limiting resistor is calculated as,