The Fig. 3-2 shows the Two Diode Full Wave Rectifier Circuit, and its input voltage is supplied from a transformer (T1) with a center-tapped secondary winding. The circuit is essentially a combination of two half-wave rectifier circuits, each supplied from half of the transformer secondary. 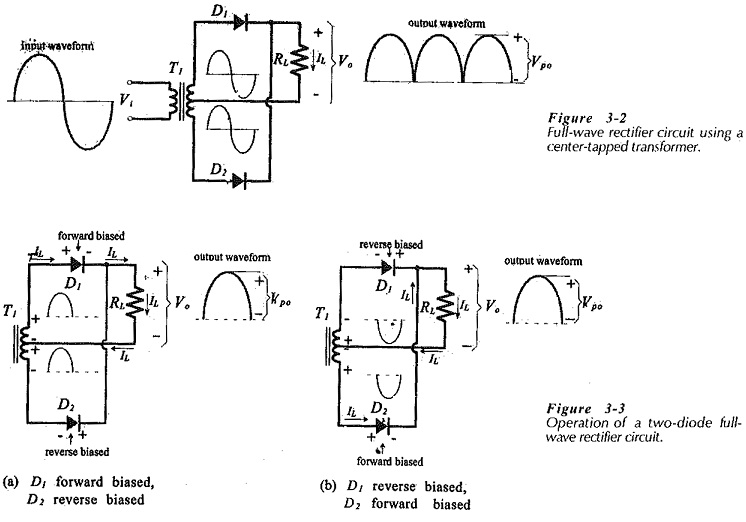 The center-tapped transformer used in the circuit of Fig. 3-2 is usually more expensive and requires more space than additional diodes. So, a bridge rectifier is the circuit most frequently used for full-wave rectification.

Figures 3-5(c) and (d) show that diodes D2 and D3 are forward biased during the negative half-cycle of the input waveform, while D1 and D4 are reverse biased. Although the circuit input terminal polarity is reversed, IL again flows through RL from top to bottom, via D3 and D2. 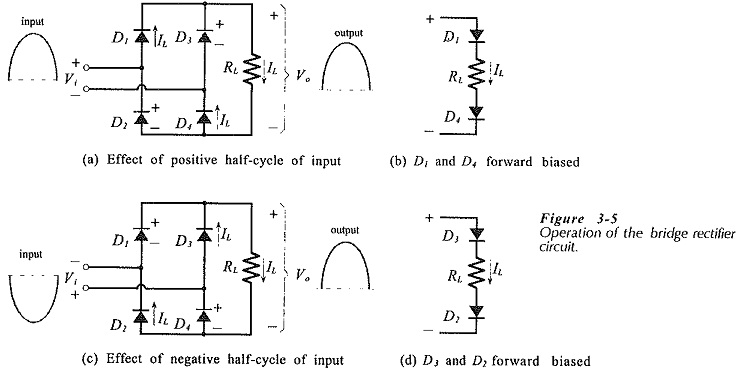 The bridge rectifier has two forward-biased diodes in series With the supply voltage and the load. Because each diode has a forward voltage drop (VF), the peak output voltage is,

As in the case of the half-wave rectifier, a reservoir capacitor substantially changes the full-wave rectified output voltage waveform and affects the diode current and voltage requirements.

Figure 3-6 shows two common methods of drawing a bridge rectifier circuit. Although they both look more complex than the circuit in Fig. 3-4, comparison shows that they are exactly the same circuit. The cathodes of D1 and D3 in all three circuits are connected to the positive output terminal, and the anodes of D2 and D4 are connected to the negative output terminal. Also, the ac input is applied to the junction of D1 and D2 and the junction of D3 and D4.