A half subtractor is a combinational circuit that subtracts two bits and produces their difference. It also has an output to specify if a 1 has been borrowed. Let us designate minuend bit as A and the subtrahend bit as B. The result of operation A – B for all possible values of A and B is tabulated in Table 3.8. 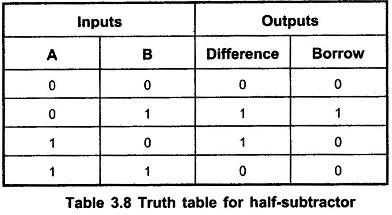 A Full Subtractor Circuit is a combinational circuit that performs a subtraction between two bits, taking into account borrow of the lower significant stage. This circuit has three inputs and two outputs. The three inputs are A, B and Bin, denote the minuend, subtrahend, and previous borrow, respectively. The two outputs, D and Bout represent the difference and output borrow, respectively. The Table 3.9 shows the Full Subtractor Truth Table. 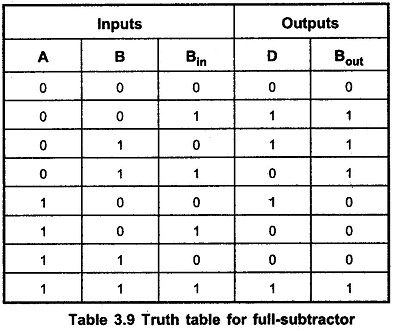 K-map simplification of D and Bout: 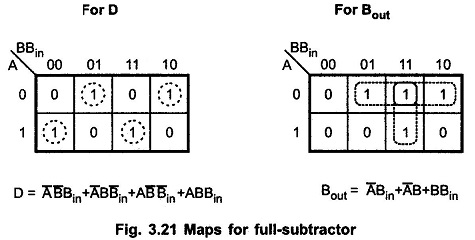 The Boolean function for D (difference) can be further simplified as follows:

With this simplified Boolean function circuit for Full Subtractor Circuit can be implemented as shown in the Fig. 3.23. The borrow output for circuit shown in Fig. 3.24 can be given as