Surface Acoustic Waves Devices may be propagated on the surfaces of solid piezoelectric materials, at frequencies in the VHF and UHF regions. Devices employing SAW principles were first discussed in the late 1960s, then moved out of the laboratory in about 1974, and since about 1978 have found many applications as passive components in the low microwave range.

The application of an ac voltage to a plate of quartz crystal will cause it to vibrate and, if the frequency of the applied voltage is equal to a mechanical resonance frequency of the crystal, the vibrations will be intense. Because quartz is piezoelectric, all mechanical vibrations will be accompanied by electric oscillations at the same frequency. The mechanical vibrations can be made very stable in frequency, and consequently piezoelectric crystals find many applications in stable oscillators and filters. As the desired frequency of operation is raised, so quartz plates must be made thinner and thus more fragile, so that crystal oscillators are not normally likely to operate at fundamental frequencies much in excess of 50 MHz.

It is possible to multiply the output frequency of an oscillator almost indefinitely, but inconvenience would be avoided if multiplication were unnecessary. This may be done with SAW resonators, which employ thin lines etched on a metallic surface electrode-posited on a piezoelectric substrate. The etching is performed by using photolithogra­phy or electron beam techniques, while the most commonly used piezoelectric materials are quartz and lithium niobate. 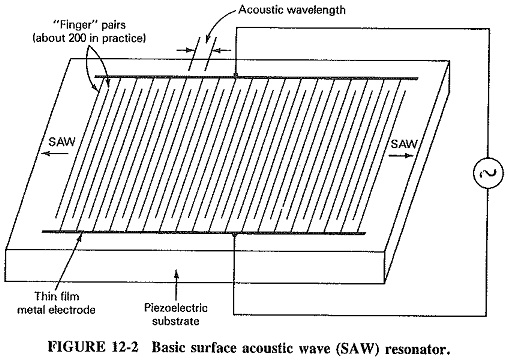 A simplified sketch of a typical interdigitated Surface Acoustic Waves Devices resonator is shown in Figure 12-2. Traveling waves in both directions result from the application of an RF voltage between the two electrodes, but the resulting standing wave is maintained adequately only at the frequency at which the distance between adjoining “fingers” is equal to an (acoustic) wavelength, or a multiple of a wavelength along the surface of the material. As with other piezoelectric processes, an electric oscillation accompanies the mechanical surface oscillation.

If the device is used as a filter, only those frequencies that are close to the resonant frequency of the SAW resonator will be passed. Because the mechanical Q is high (though not quite as high as that of a quartz crystal being used as a standard resonator), the Surface Acoustic Waves Devices is a narrowband bandpass filter. To use the SAW resonator to produce oscillations, one need merely place it, in series with a phase-shift network, between the input and output of an amplifier. The phase shift is then adjusted so as to provide positive feedback, and the amplifier will produce oscillations as the frequency permitted by the SAW resonator.

There is no obvious lower limit to the operating frequency of a SAW resonator, except that it is unlikely to be used below about 50 MHz, because at such frequencies straightforward crystal oscillators can be used. The upper frequency limit is governed by photoetching accuracy. Because wavelength = v/f and the velocity of the acoustic wave is approximately 3000 m/s, it is easy to calculate that the finger separation at 5 GHz should be 0.6 μm, and the fingers themselves must be thinner still. In consequence, 5 GHz represents the current upper limit of Surface Acoustic Waves Devices resonator operation.