Diffraction of radio waves is yet another property shared with optics and concerns itself with the behaviour of electromagnetic waves, as affected by the presence of small slits in a conducting plane or sharp edges of obstacles. It was first discovered in the seventeenth century and put on a firm footing with the discovery of Huygens’ principle fairly soon afterwards. (Francesco Grimaldi discovered that no matter how small a slit was made in an opaque plane, light on the side opposite the source would spread out in all directions. No matter how small a light source was constructed, a sharp shadow could not be obtained at the edge of a sharp opaque obstacle. The Dutch astronomer Christian Huygens, the founder of the wave theory of light, gave an explanation for these phenomena that was published in 1690 and is still accepted and used.)

Huygens’ principle states that every point on a given (spherical) wavefront may be regarded as a source of waves from which further waves are radiated outward, in a manner as illustrated in Figure 8-9a. The total field at successive points away from the source is then equal to the vector sum of these secondary wavelets. For normal propagation, there is no need to take Huygens’ principle into account, but it must be used when Diffraction of radio waves is to be accounted for. Huygens’ principle can also be derived from Maxwell’s equations. 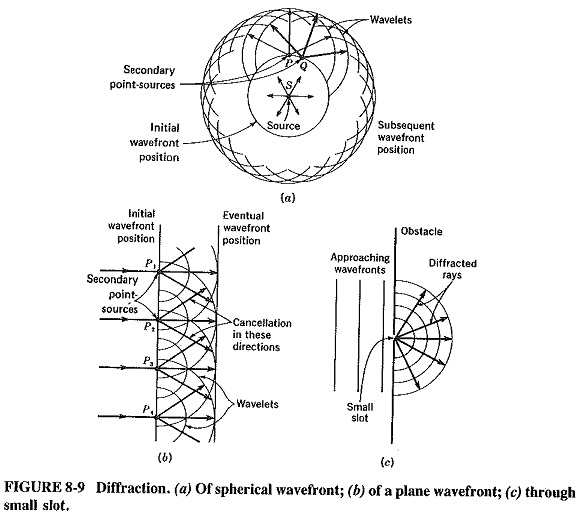 If a plane wave is considered, as in Figure 8-9b, the question that arises immediately is Why the wavefront continues as a plane, instead of spreading out in all directions. The answer is that an infinite plane wave has been considered, and mathematics shows that cancellation of the secondary wavelets will occur in all directions other than the original direction of the wavefront; thus the wavefront does continue as a plane. When a finite plane is considered, the cancellation in spurious directions is no longer complete, so that some divergence or scattering will take place. For this to be noticeable, however, the wavefront must be small, such as that obtained with the aid of the slot in a conducting plane, as in Figure 8-9c. It is seen that instead of being “squeezed through” as a single ray, the wave spreads out past the slot, which now acts as Huygens’ point source on a wavefront and radiates in all directions. The radiation is maximum (but not a sharp maximum if the slot is small) in front of the slot and diminishes gradually away from it.

Figure 8-10 shows what happens when a plane wave meets the edge of an obstacle. Although a sharp shadow might have been expected, diffraction takes place once again for precisely the same reasons as before. If two nearby points on the wavefront, P and Q, are again considered as sources of wavelets, it is seen that radiation at angles away from the main direction of propagation is obtained. Thus the shadow zone receives some radiation. If the obstacle edge had not been there, this side radiation would have been cancelled by other point sources on the wavefront. 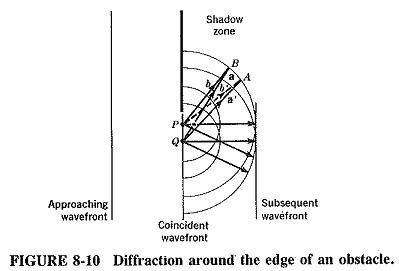 Radiation once again dies down away from the edge, but not so gradually as with a single slot because some interference takes place; this is the reason why two point sources on the wavefront were shown. Given a certain wavelength and point separation, it may well be that rays a and a’, coming from P and Q, respectively, have a path difference of a half-wavelength, so that their radiations cancel. Similarly, the path difference between rays b and b’ may be a whole wavelength, in which case reinforcement takes place in that direction. When all the other point sources on the wavefront are taken into account, the process becomes less sharp. However, the overall result is still a succession of interference fringes (each fringe less bright than the previous) as one moves away from the edge of the obstacle.

This type of Diffraction of radio waves is of importance in two practical situations. First, signals propagated by means of the space wave may be received behind tall buildings, mountains and other similar obstacles as a result of Diffraction of radio waves. Second, in the design of microwave antennas, diffraction plays a major part in preventing the narrow pencil of radiation which is often desired, by generating unwanted side lobes.