Transmission of Waves at Transition Points:

Whenever there is an abrupt change in the parameters of a transmission line, such as an open circuit or a termination, the travelling wave undergoes a transition, part of the wave is reflected or sent back and only a portion is transmitted forward. At the Transmission of Waves at Transition Points, the voltage or current wave may attain a value which can vary from zero to two times its initial value.

The incoming wave is called the incident wave and the other waves are called the reflected and Transmission of Waves at Transition Points. Such waves are formed according to the Kirchhoff’s laws and they satisfy the line differential equations. In Fig. 8.15, is shown a typical general Transmission of Waves at Transition Points. 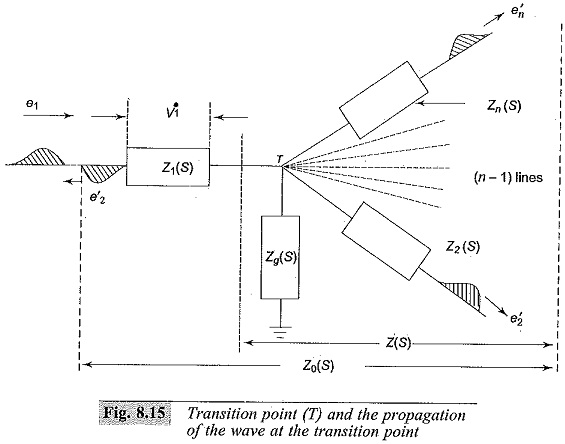 At the junction point T,

and the reflected current wave is

The coefficients multiplying the incident quantities are called the reflection coefficients.

The impedance of any line is given by Zk (s) + Zk.

Solving the above equations, the junction potential e0 can be written as

All the above functions are in the transformed form as functions of `s’ (the Laplace transform operator), and the inverse transform gives the desired time functions.

the transmission coefficient is (1 + γ) for voltage waves. The reflected and transmitted waves are then given by

It may be easily verified that

Solutions for lines terminated with lumped impedances can be easily worked out and the solutions for few cases are given in section 8.1.6. The above analysis of the travelling waves indicate how the waves are modified at Transmission of Waves at Transition Points. There can be doubling effect at the junction point which contributes to the over voltages in power system networks. In many overvoltage calculations, travelling wave analysis will be useful for overvoltage and overcurrent calculations.

In many problems involving short cable lengths, or lines tapped at intervals, the travelling waves encounter successive reflections at the Transmission of Waves at Transition Points. It is exceedingly difficult to calculate the multiplicity of these reflections and in his book, Bewley has given the lattice or time-space diagrams from which the motion of reflected and transmitted waves and their positions at every instant can be obtained. The principles observed in the lattice diagrams are as follows:

The above comprehensive description can be understood by considering the example shown in Fig. 8.16. 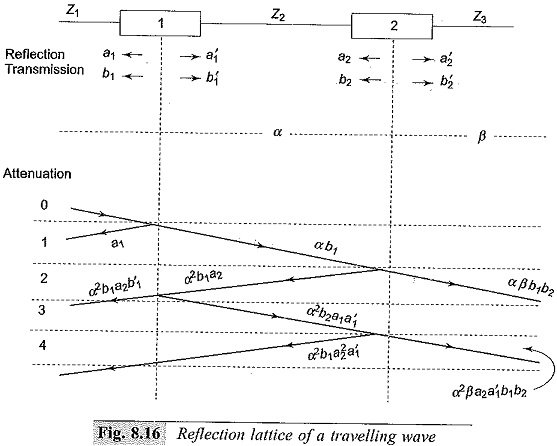 To construct the lattice diagram, the position 0 is taken when the wave coming from Z1 reaches junction 1. Junction 2 is taken to scale at the time interval equal to the travel time through the line Z2 between the junctions 1 and 2. The diagram is drawn by choosing the suitable time  scale. The reflection and the transmission factors are marked as shown in the figure. The process of calculation is indicated on the slope of the lines in the diagram. The process can be continued for up to the required time interval.