Surface Tension – Due to molecular attraction, liquids have properties of cohesion and adhesion. 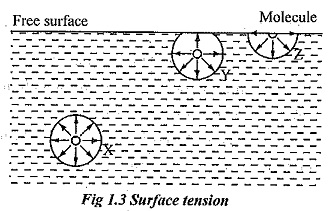 Surface tension is due to the force of cohesion between liquid particles at the free surface. A liquid molecule at the interior of the liquid are generally free to move within the liquid and they move at random, because these molecules are attracted equally in all direction by the other surrounding molecules and is in equilibrium. When they reach free surface, there are no molecules above the surface to balance the force of the molecules below it. This phenomenon is illustrated by the fig. 1.3.

Consider three molecules X, Y and Z in the liquid. Molecule X is attracted equally in all direction therefore it is in equilibrium condition. It exerts equal force in all direction. The resultant force acting on the molecule is zero. Consider molecule Y which is placed near the free surface. The upward and downward force acting on that molecule Y is unbalanced. Obviously the net resultant force is acting downward direction. The molecule Z is placed at the free surface and it has a net downward force.

Some important real life examples are

(i) Formation of water bubbles.

(iv) A small needle can gently placed on the liquid surface without sinking.

(i) Nature of the liquid.

(ii) Nature of the surrounding liquid.

(iii)Kinetic energy of the liquid.

P — Pressure inside the droplet above outside pressure.

σ — Surface tension of the liquid.

d — Diameter of the droplet. 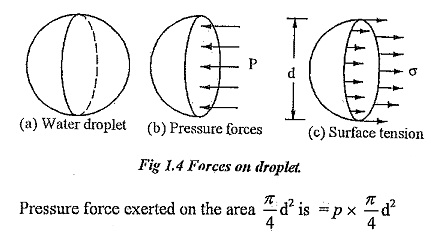 Under the equilibrium condition, these forces are equal and opposite.

From the above relation we can conclude that with an increase in size if the droplet the pressure intensity decreases.

Surface tension in a soap bubble:

A soap bubble is a hollow bubble in which air has two surfaces in contact with bubble, one inside and other outside.

Pressure inside the soap bubble

Surface tension on a liquid jet:

Equating the above two equations 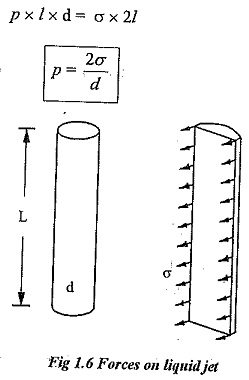