There are two common methods used for burning coal. 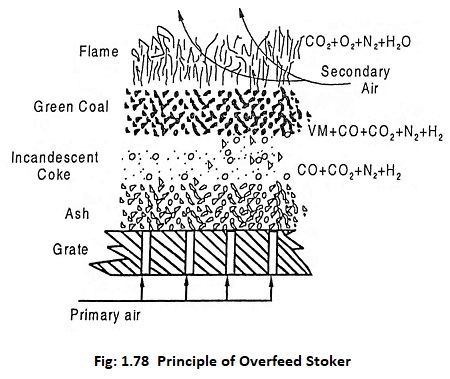 Stokers are generally used to fire solid fuels in the furnace. Stokers carry the fuel into the furnace for combustion. They discharge the combustion products to the appropriate place. The different types of stokers are:

In overfeed stoker, the coal is fed on the grate above the entry point of the air. The primary air is forced through bottom of the grate by the forced draught fan. The air gets heated while it passes through grate openings and ash. Then it passes through a layer of incandescent (glowing with heat) cock, where the oxygen (O2) reacts with coke (carbon) to form carbon-di-oxide CO2. The water vapour in the air reacts with incandescent coke and forms carbon-di-oxide (CO2), carbon monoxide (CO) and free hydrogen (H2). The raw coal is continuously supplied over the fuel bed, the volatile matters are removed by the heat of the incandescent coke by distillation. The gases leaving the surface of the fuel bed are CO2, CO, N2, H2, H2O and combustible volatile matter. Secondary air is supplied over the surface of the fuel bed for burning the combustible gases. During incandescent, carbon in the fuel is lost by oxidation and only ash remains. The ash settles down at the bottom of the grate.

In this type, the grate surface is made up of a series of cast iron links connected by pins to form an endless chain. This chain forms the fuel bed support. The chain travels over two sprocket wheels, one at the front of the furnace and another at the back. The front wheel is driven by a variable speed drive mechanism. 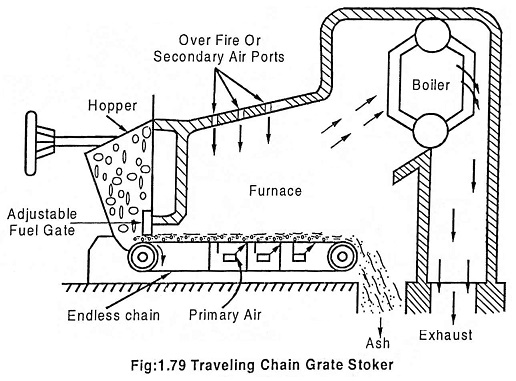 By gravity, the coal is fed to the travelling chain from the hopper. The depth of the fuel bed is adjusted by adjusting the fuel grate opening. According to the combustion, the speed of the chain is controlled.

Through the air inlets, the primary air required for combustion enters. The air duct under the grate is divided into sections to enable air supply to different ports of the stoker. The secondary air is supplied through the ports provided in the furnace walls. Both primary and secondary air supplied provides turbulence required for rapid combustion. The ash falls down at the rear end of the stoker and deposited in the ash pit.

Spreader stoker consists of a hopper, feeder, spreader and openings for admitting air. In front of furnace wall, the coal feeding and distributing mechanism is located. The feeder is a rotating drum which consists of number of small blades. Spreader consists of a fast rotating shaft carrying twisted blades. Both travelling and stationary grates are used with spreader stoker. 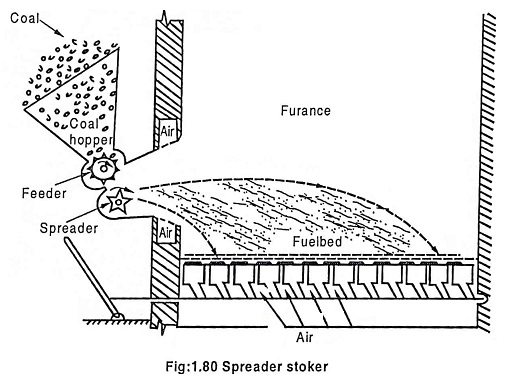 By gravity, the coal is fed to the feeder from hopper. According to the combustion requirement, the feeder supplies the coal to the spreader.

The fast rotating blades of the spreader receives the coal particles coming from the feeder and distributes the coal uniformly over the grate. A part of coal is burnt in suspension and the remaining is burnt in the grate. Forced draught fan is used for supplying the required amount of air through grate openings.

This consists of a hopper, a cylinder fitted with ram, tuyeres for air and pushers. 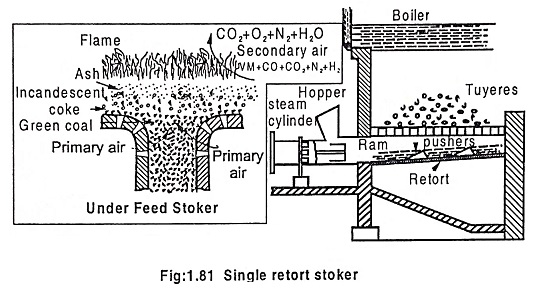 Multi retort stoker consists of a series of alternate retorts and tuyere box. Each retort is fitted with pusher plate for uniform coal distribution. The coal is fed by gravity. This coal is pushed forward by the stoker ram. Then the pushers force the coal down to the entire stoker. Through tuyeres, the primary air is supplied. The ashes are collected at the lower end of the stoker. 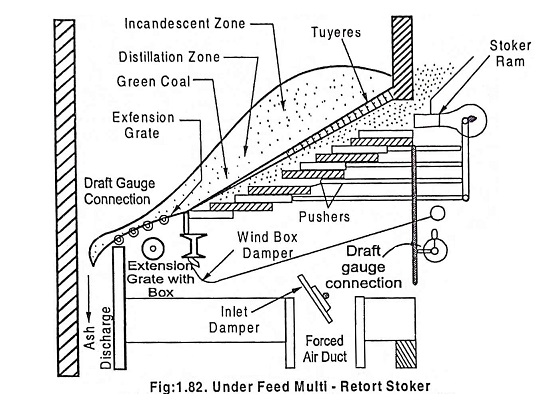 To increase the surface exposure, the coal is pulverised. This enables rapid combustion. The pulverised coal is produced by grinding the raw coal in pulverizing mills. There are different types of pulverising mills namely 1. ball mill, 2. hammer mill and 3. bull and race mill 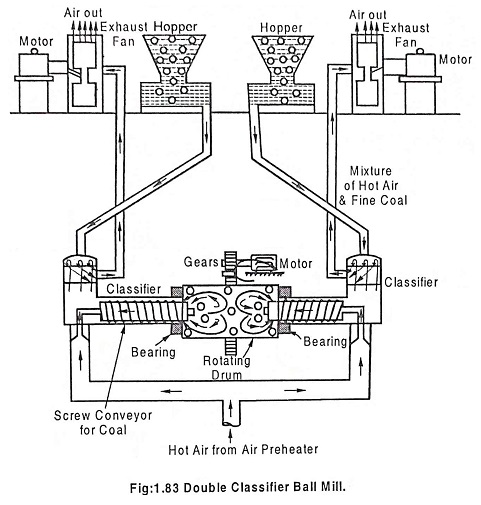 A ball mill consists of steel balls partly filled in a drum. The drum is rotated slowly. The raw coal is fed to the feeding hoppers. The coal moves to the drum through the classifiers and screw conveyors. As the drum rotates, there is a continuous impact between coal and the steel balls. Thus the coal is powdered. Hot air is passed through the drum. This air picks up the powdered coal with it. The coal air mixture enters the classifiers. In classifier oversized coal is returned back to the drum. The powdered coal and air mixture is drawn by the exhaust fan and supplied to the burners.

There are two methods of pulverised fuel firing system. 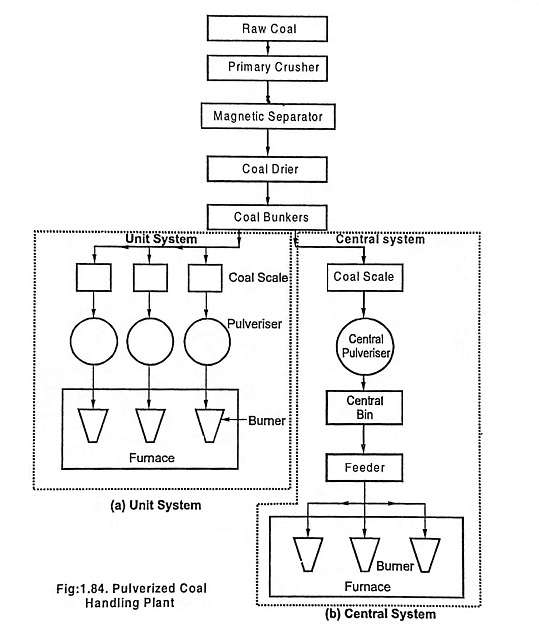 The raw coal is supplied to the feeder from the coal bunker. Hot air (or) flue gas is passed through the feeder to dry the coal. The dried coal is fed into the pulverising mill and powdered. The induced draught fan brings primary air to the pulverising mill. This air carries coal with it and supplies to the burner through pipe. The secondary air is added in the burner before the fuel enters the combustion chamber. 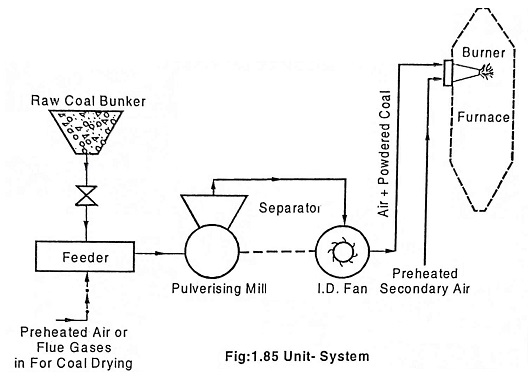 A line diagram of bin system is shown in Fig.1.84(b) and 1.86. By gravity, the coal is supplied to the feeder or drier from the raw coal bunker. The coal is dried by passing hot gases, preheated air or bleeder steam. Then it is fed to the pulverising mill where it is pulverised. 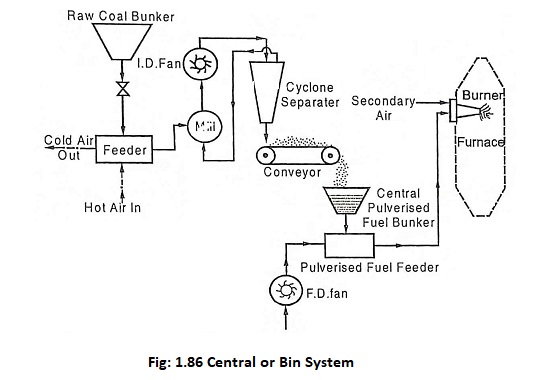 An induced draught fan draws coal powder and air from the pulveriser and then it is passed through cyclone separator where air is separated from coal. The separated coal is transferred to the central fuel bunker (bin) by the conveyor system. Then the powdered coal enters the feeder. A forced draught fan supplies primary air into the feeder and the mixture of air and powdered coal is supplied to the burner.