The structure of Thyristor in Static Relay consists of four alternate p-and n-type layers. In the thyristor (also called a silicon controlled rectifier—SCR) connections are made available to the inner layers. It acts like two transistors in tandem, one pnp and another npn. Figure (10.16) shows the circuit symbol for the SCR. 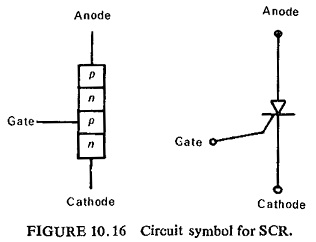 The usefulness of the gate terminal rests on the fact that current introduced into the gate may be used to control the anode to cathode breakover voltage. 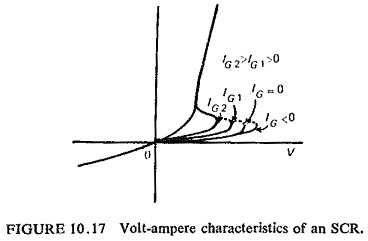 Suppose that a supply voltage is applied through a load resistor between anode and cathode of a SCR. Consider that the bias is such that the applied voltage is less than breakover voltage. Then the rectifier will remain off and may be turned on by the application to the gate of a triggering current or voltage adequate to lower the breakover voltage to less than the applied voltage.

The rectifier having been turned, on, it latches, and it is found to be impractical to stop the conduction by reverse-biasing the gate. For example, it may well be that the reverse gate current for turn off is nearly equal to the anode current.

Because of its high speed a thyristor is easily triggered by a small voltage signal (5V, 0.1m A). To prevent wrong operation it is customary to design the circuit so that the tripping signal will not trigger the thyristor unless it lasts for at least 2 mS. This prevents operation on interference spikes since they are momentary in nature (of the order of microseconds).