An MOS Controlled Thyristor (MCT) is a thyristor-like trigger-into-conduction device that can be turned on or off by a short pulse on the MOS gate. It is a high power, high frequency, low conduction drop switching device and shows a tremendous promise for next generation power electronics. The device was announced by General Electric on November 30, 1988. 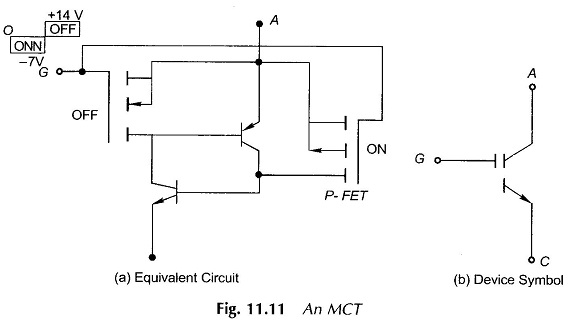 Unlike other power switching devices (except power MOSFET), an MCT is primarily parallel connection of thousands of identical microcells on the same chip. Figure 11.11 shows the equivalent circuit and symbol of the device. Unlike MOSFET, its input capacitance is fixed owing to the absence of Miller effect. The MCT’s can easily be connected in series-parallel combination for a higher power requirement. Table 11.3 gives the typical parameters of a 50 A, 500 V device at Tj = 150 °C.

The MOS Controlled Thyristor shows a great possibility for widespread applications which include dc and ac motor drives, UPS systems, induction heating, dc-ac converters, active power line conditioners, etc. Its all-round superior characteristics show that it is going to challenge majority of the present power devices, such as SCRs, BJTs, IGBTs and SITHs.

Important features of MCT are: