A lightning arresters or a surge diverter is a protective device which conducts the high voltage surges on the power system to the ground. Fig. 24.8 (i) shows the basic form of a surge diverter. It consists of a spark gap in series with a non-linear resistor. One end of the diverter is connected to the terminal of the equipment to be protected and the other end is effectively grounded. The length of the gap is so set that normal line voltage is not enough to cause an arc across the gap but a dangerously high voltage will break down the air insulation and form an arc. The property of the non-linear resistance is that its resistance decreases as the voltage (or current) increases and vice-versa. This is clear from the *volt/amp characteristic of the resistor shown in Fig. 24.8 (ii).

The action of the lightning arresters or surge diverter is as under :

Two things must be taken care of in the design of a lightning arresters. Firstly, when the Surge Diverter is over, the arc in gap should cease. If the arc does not go out, the current would continue to flOw through the resistor and both resistor and gap may be destroyed. Secondly, I R drop (where I is the surge current) across the arrester when carrying surge current should not exceed the breakdown strength of the insulation of the equipment to be protected.

It is a very simple Line type of diverter and consists of two 1.5 cm rods which are bent at tight angles with a gap in between as shown in Fig. 24.9. One rod is connected to the line circuit and the other rod is connected to earth. The distance between gap and insulator Transformer distance must not be less than one-third of the gap length so that the arc may not reach the insulator and damage it. Generally, the gap length is so adjusted that breakdown should occur at 80%  of spark- over voltage in order to avoid cascading of very steep wave fronts across the insulators. The string of insulators for an overhead line on the bushing of transformer has frequently a rod gap across it. Fig. 24.9 shows the rod gap across the bushing of a transformer. 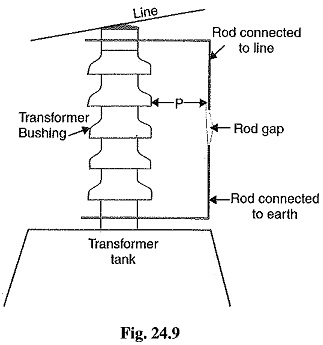 Due to the above limitations, the rod gap arrester is only used as a tack-up’ protection in case of main arresters.

Fig. 24.10 shows the horn gap arrester. It consists of two horn shaped metal rods A and B separated by a small air gap. The horns are so constructed that distance between them gradually increases towards the top as shown. The horns are mounted on porcelain insulators. One end of horn is connected to the line through a resistance R and choke coil L while the other end is effectively grounded. The resistance R helps in limiting the follow current to a small value. The choke coil is so designed that it offers small reactance at normal power frequency but a very high reactance at transient frequency. Thus the choke does not allow the transients to enter the apparatus to be protected. The gap between the horns is so adjusted that normal supply voltage is not enough to cause an arc across the gap.

Under normal conditions, the gap is non-conducting i.e. normal supply voltage is insufficient to initiate the arc between the gap. On the occurrence of an overvoltage, spark-over takes place across the small gap G. The heated air around the arc and the magnetic effect of the arc cause the arc to travel up the gap. The arc moves progressively into positions 1, 2 and 3. At some position of the arc (perhaps position 3), the distance may be too great for the voltage to maintain the arc. Consequently, the arc is extinguished. The excess charge on the line is thus, conducted through the arrester to the ground.

Due to the above limitations, this type of arrester is not reliable and can only be used as a second line of defense like the rod gap arrester.

Fig. 24.11 shows the multigap arrester. It consists of a series of metallic (generally alloy of zinc) cylinders insulated from one another and separated by small intervals of air gaps. The first cylinder (i.e. A) in the series is connected to the line and the other,to the ground through a series resistance. The series resistance limits the power arc. By the inclusion of series resistance, the degree of protection against travelling waves is reduced. In order to overcome this difficulty, some of the gaps (B to C in Fig. 24.11) are shunted by a resistance.

Under normal conditions, the point B is at earth potential and the normal supply voltage is unable to break down the series gaps. On the occurrence of an overvoltage, the breakdown of series gaps A to B occurs. The heavy current after breakdown will choose the straight – through path to earth via the shunted gaps B and C, instead of the alternative path through the shunt resistance. When the surge is over, the arcs B to C go out and any power current following the Surge Diverter is limited by the two resistances (shunt resistance and series resistance) which are now in series. The current is too small to maintain the arcs in the gaps A to B and normal conditions are restored. Such arresters can be employed where system voltage does not exceed 33 kV.

This Expulsion Type Lightning Arrester is also called ‘protector tube’ and is commonly used on system operating at voltages upto 33 kV. Fig. 24.12 (i) shows the essential parts of an Expulsion Type Lightning Arrester. It essentially consists of a rod gap AA’ in series with a second gap enclosed within the fibre tube. The gap in the fibre tube is formed by two electrodes. The upper electrode is connected to rod gap and the lower electrode to the earth. One expulsion arrester is placed tinder each line conductor. Fig. 24.12 (II) shows the installation of expulsion arrester on an overhead line. 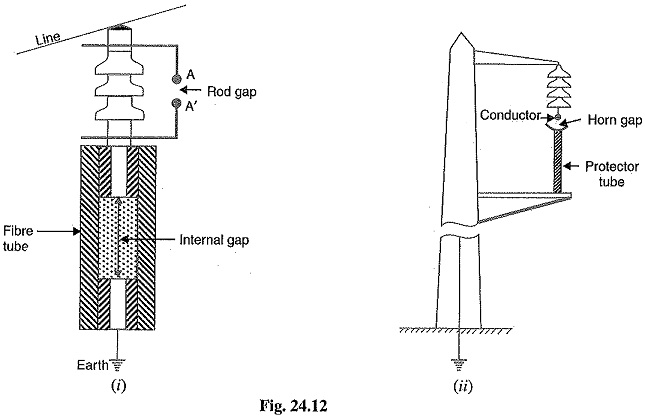 On the occurrence of an overvoltage on the line, the series gap AA’ is spanned and an arc is struck between the electrodes in the tube. The heat of the arc vaporises some of the fibre of tube walls, resulting in the production of a neutral gas. In an extremely short time, the gas builds up high pressure and is expelled through the lower electrode which is hollow. As the gas leaves the tube violently, it carries away ionised air around the arc. This de-ionising effect is generally so strong that arc goes out at a current zero and will not be re-established. 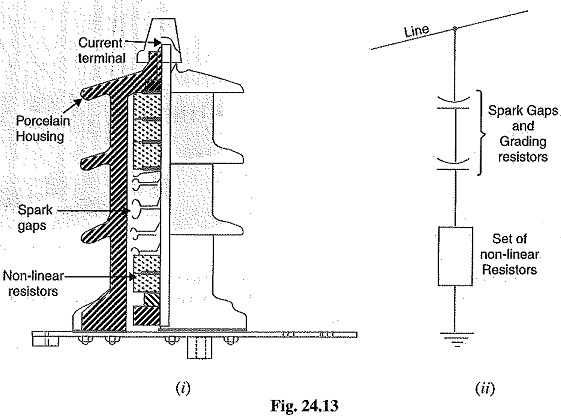 (i) The spark gap is a multiple assembly consisting of a number of identical spark gaps in Each gap consists of two electrodes with a fixed gap spacing. The voltage distribution across the gaps is linearised by means of additional resistance elements (called grading resistors) across the gaps. The spacing of the series gaps is such that it will withstand the normal circuit voltage. However, an overvoltage will cause the gap to breakdown, causing the surge current to ground via the non-linear resistors.

Working: Under normal conditions, the normal system voltage is insufficient to cause the breakdown of air gap assembly. On the occurrence of an overvoltage, the breakdown of the series spark gap takes place and the surge current is conducted to earth via the non-linear resistors. Since the magnitude of surge current is very large, the non-linear elements will offer a very low resistance to the passage of Surge Diverter. The result is that the surge will rapidly go to earth instead of being sent back over the line. When the surge is over, the non-linear resistors assume high resistance to stop the flow of current.