Microprocessor Based Instruments – Digital instruments are designed around digital logic circuits without memory. The use of microprocessors as an integral part of measuring instruments has given rise to a whole new class of instruments, called intelligent instruments.

Figure 6.28 shows a block diagram of a microprocessor based impedance measuring instrument. The operation makes interface with the instrument via the IEEE 488 bus to allow control by, or to make the measurement available to, a large external computer system. The timing clock signal and the ac test signal are provided by frequency division of the oscillator signal. 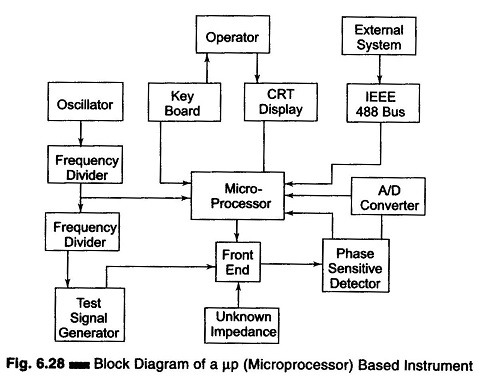 The front end circuit applies the test signal to the unknown impedance and an standard impedance provides an output signal, proportional to the voltage across each, to the phase sensitive detector. Signal transfer is controlled by the microprocessor.

The phase sensitive detector, which is also controlled by the microprocessor, converts the ac inputs of the impedance in vector form to a dc output.

The A/D converter provides the digital data, which is used by the micro­processor to compute the value of the unknown impedance. This is then dis­played on the CRT or sent as output to the IEEE 488 bus.