We have seen the instruction set of 8085 and some simple assembly language programs using it. We know that, the program is an implementation of certain logic by executing group of instructions. To implement program logic we need to take help of some common Programming Techniques in Microprocessor 8085 such as looping, counting, indexing and code conversion.

In this section, we are going to study how to implement these Programming Techniques in Microprocessor 8085 assembly language and some programming examples using them.

Before going to implement these Programming Techniques in Microprocessor 8085, we get conversant with these techniques and understand the use of them.

Looping : In this Programming Techniques in Microprocessor 8085, the Program is instructed to execute certain set of instructions repeatedly to execute a particular task number of times. For example, to add ten numbers stored in the consecutive memory locations we have to perform addition ten times.

Counting : This technique allows programmer to count how many times the instruction/set of instructions are executed.

Indexing : This Programming Techniques in Microprocessor 8085 allows programmer to point or refer the data stored in sequential memory locations one by one. Let us see the program loop to understand looping, counting and indexing.

The Program loop is the basic structure which forces the processor to repeat a sequence of instructions. Loops have four sections. 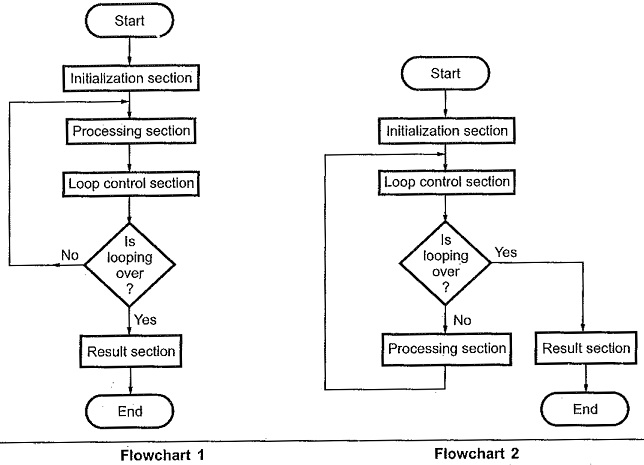 As you know microprocessor system consists of two basic components, Hardware and software. The software component controls and operates the hardware to get the desired output with the help of instructions. To execute these instructions, microprocessor takes fix time as per the instruction, since it is driven by constant frequency clock. This makes it possible to introduce delay for specific time between two events. In the following section we will see different delay implementation techniques.

Counting can create time delays. Since the execution times of the instructions used in a counting routine are known, the initial value of the counter, required to get specific time delay can be determined.

In this, there are more than one loops. The innermost loop is same as explained above. The outer loop sets the multiplying count to the delays provided by the innermost loop.

This Programming Techniques in Microprocessor 8085 is to translate a number represented using one coding system to another. For example,, when we accept any number from the keyboard it is in ASCII code. But for processing, we have to convert this number in its hex equivalent. The code conversion involves some basic conversions such as

We are more familar with the decimal number system. But the microprocessor understands the binary/hex number system. To convert BCD number into its binary equivalent we have to use the principle of positional weighting in a given number.

We know that microprocessor processes data in the binary form. But when it is displayed, it is in the BCD form. In this case we need binary to BCD conversion of data. The conversion of binary to BCD is performed by dividing the number by the power of ten.

Many times 7-segment LED display is used to display the results or parameters in the microprocessor system. In such cases we have to convert the result or parameter in 7-segment code. This conversion can be done using look-up technique. In the look-up table the codes of the digits (0-9) to be displayed are stored sequentially in the memory. The conversion program locates the code of a digit based on its BCD digit. Let us see the Program for BCD to common cathode 7-segment code conversion.