There are seven different types of machine cycles in the 8085A. Three status signals IO/M, S1 and S0 identify each type as shown in Table 1.1. These signals are generated at the beginning of each machine cycle and remained valid for the duration, of the cycle. 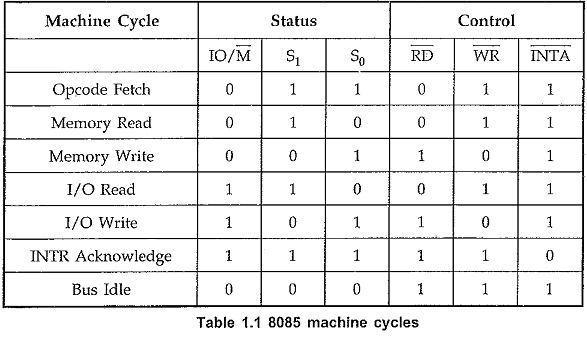 Representation of 8085 Signals and their Functions:

Group of signals is also called a bus e.g. address bus and data bus. To avoid complications in the timing diagram these signal are grouped and shown in the form of block as shown in Fig. 1.7.

In the group representation individual state is not considered, but the group state is considered. Change in state of single signal changes the state of group. It is represented by the cross as shown the Fig. 1.7. The tri-state condition of the group signals is shown by dotted lines. Two straight lines represent valid state/stable state.

In microprocessor systems, activation of signal/signals depends on the state of other signal/signals. Such situations are shown in the timing diagrams with the help of specific symbols. There are four possibilities :

Fig. 1.8 shows the representation of dependence of the signal/signals, in the timing diagram.

The lower byte of address is available on the multiplexed address/data bus (AD0 – AD7) during T1 state of each machine cycle, except bus idle machine cycle, as shown in Fig. 1.10.

To read data from memory or I/O device it is necessary to select memory or I/O device. After selection, device will put the data from, selected location on the data bus. This action needs finite time. This time is referred to as ‘access time‘ . In case, of write cycle, data is available in the registers of the microprocessor and it can put that data on the data bus with zero access time. 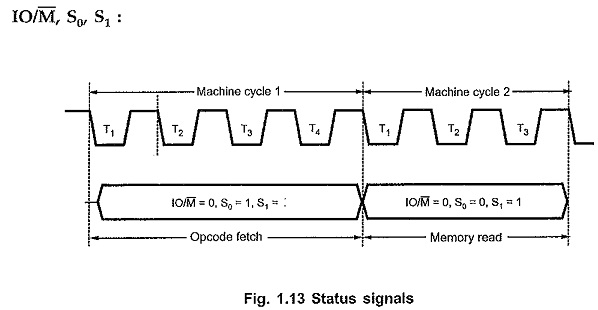 These signals are called status signals. They decide the type of machine cycle to be executed. They are activated at the beginning of T1-state of each machine cycle and remain active till the end of the machine cycle.