1.Processor Memory Organisation:The term processor memory organization refers to how certain areas of memory in a given Basis of PLC Programming are used. Different PLC manufacturers organize their memories in different ways. Even though they do not use the same memory make up and terminology, the principles involved are the same.

Figure 21.66 shows an illustration of memory organization known as a memory map. Every Basis of PLC Programming has a memory map. It need not be the same as the one illustrated. The memory space can be divided into two broad categories the user program and the data table. 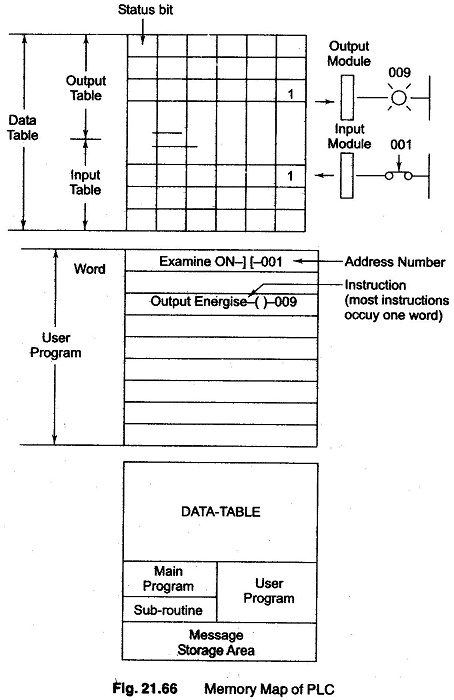 The user program is where the programmed logic ladder diagram is entered and stored. The user program will account for most of the total memory of a given Basis of PLC Programming system. It contains the logic that controls the machine operation. The logic consists of instructions that are programmed in a ladder format. Most instructions require one word of memory.

The data table stores the information needed to carry out the user program. This include, such information as the states of input and output devices, timer and counter values, data storage and so on.

The data table can be divided into the following three sections according to the type of information to be remembered—The input image table, the output image table, and timer and counter storage.

The input image table stores the status of the digital inputs which are connected to input interface circuits. 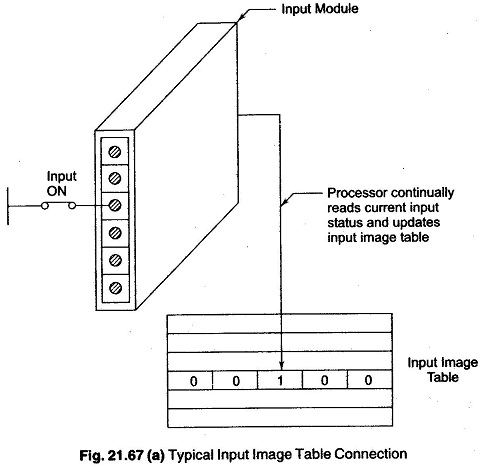 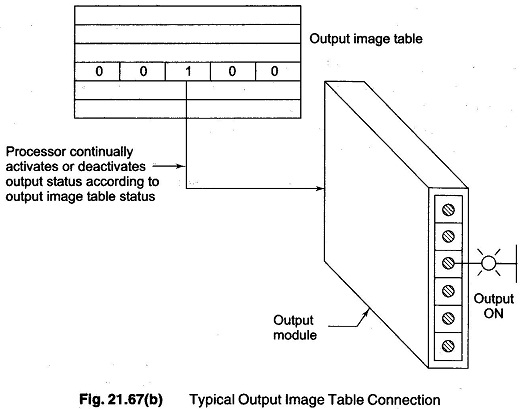 During each operating cycle, the processor reads all the inputs takes their val­ues and according to the user program energises or de-energises the outputs. This process is known as a scan. Figure. 21.68 illustrates a single PLC scan, which consists of the 1/0 scan and the program scan. The Basis of PLC Programming scan time specification indicates how fast the controller can react to changes in inputs. Scan time varies with program content and length. The time required to make a single scan can vary from 1 ms to 100 ms. If a controller has to react to an input signal that changes states twice during the scan time it is possible that the PLC will never be able to detect this change.

The scan is normally a continuous and sequential process of reading the status of inputs, evaluating the control logic and updating the outputs. Figure. 21.69 illustrates this process. When the input device connected to address 101­14 is closed, the input module circuit senses a voltage and a 1 (ON) condition is entered into the input image table bit 101-14. 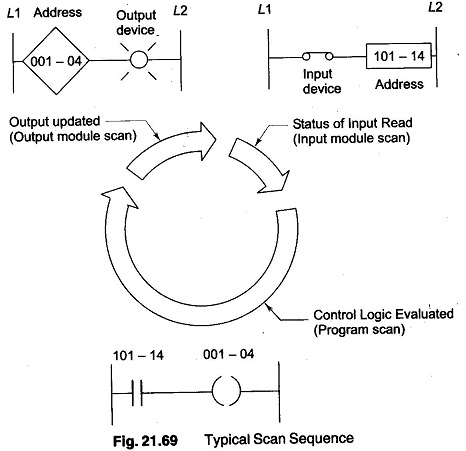