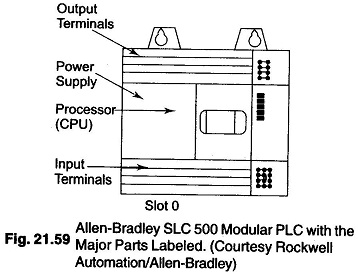 A modular PLC does not have a terminal strip built into the processor unit. Modular PLC have their I/O points on plug-in type, removable units called I/O Modules. PLC Hardware with modular inputs and outputs consist of a chasis, rack or base plate where the power supply, CPU and all input and output modules are present as separate hardware item. The diagram shown in Fig. 21.60 is assembled to make a working PLC. 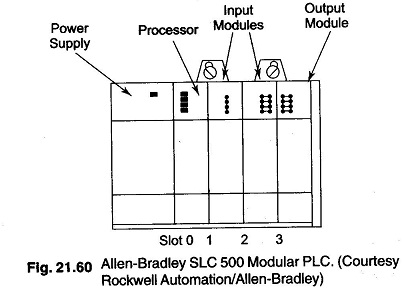 When I/0 is modular, the user can mix input and output types in the rack or base plate to meet the specific needs. There are usually few limitations on the mix or positioning of I/O modules.

One plug is located on a printed circuit board at the back of each module. A PCB that the modules plug into runs along the back of the rack or is built into a base plate, called the backplane. The backplane conveys signals from the CPU to each module and from module to the CPU.

A DIN rail is a metal track or rail attached to the back of an electrical panel, where devices can be easily clipped to or removed from the rail. The advantage of the DIN rail is that it permits easy snap-on and removal of hardware devices either at installation or for maintenance or replacement.

The power supply, which is also modular, is hooked up to line voltage. The function of the PLC Hardware power supply is to convert line voltage to low voltage dc and then isolate it for use to operate the CPU and any associated I/O module electronics in the rack or chasis. In most cases power must be supplied to all field input and output devices from a source other than the PLC’s power supply.

The CPU works like a human brain. It is a solid state microprocessor integrated chip, which is placed on PCB with other supporting and interface chips to build the PLC’s CPU or processor module. The CPU basically consists of two components. The controller and memory system.

The controller is the microprocessor or The brain that supervises all operations in the systems. The CPU reads or gathers information from external sources such as the input devices and stores this information in memory for later use by the CPU. When solving the user program is done, the CPU will write or send, data out to the external devices such as output modules and field hardware devices.

The memory system used has to provide the following: