The function of a Diode Series Clipper Circuit (or limiter) is to clip off an unwanted portion of a waveform. This is sometimes necessary to protect a device or circuit that might be destroyed by a large amplitude (negative or positive) signal.

Figure 3-25(a) shows a negative series clipper circuit with a square wave input symmetrical above and below ground level. While the input is positive, Di is forward biased and the positive half-cycle is passed to the output.

The zero level output from a series clipper circuit is not exactly zero. The reverse saturation current (IR) of the diode produces a voltage drop across resistor R1,

This is almost always so small that it can be neglected. 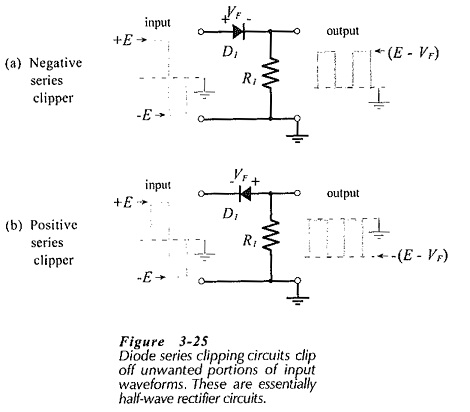 If the diode in Fig. 3-25(a) is reconnected with reversed polarity, as shown in Fig. 3-25(b), the positive half-cycles are clipped off, and the circuit becomes a positive series clipper. The input wave forms to a clipper may be square, or sinusoidal, or any other shape.

The output terminals of series clippers are usually connected to circuits that have a high input resistance, so (current-limiting) resistor R1 is selected to pass an acceptable minimum current through the diode. This current must be sufficient to operated the diode beyond the knee of its forward characteristic. Typically, a current of 1 mA is appropriate. The resistor value is calculated from the output voltage and the selected current level. The remaining part of the design process is specifying the diode.

Digital signal wave forms sometimes have unwanted lower-level noise voltages. The noise can be removed by a series noise clipping circuit, which simply consists of two inverse-parallel connected diodes, as illustrated in Fig. 3-27. When the noise amplitude is much smaller than the diode forward voltage drop (VF), and the signal amplitude is larger than VF, the signals are passed and the noise is blocked. The signal peak output voltage is (E -VF). 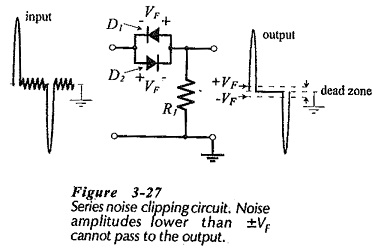 A dead zone of ±VF exists around ground level in the output waveform, indicating that inputs must exceed ±VF to pass to the output. For noise voltage amplitudes that approach ±VF, two diodes may be connected in series to give a larger dead zone.