Series Resonance Circuit – In many electrical circuits, resonance is a very important phenomenon. The study of resonance is very useful, particularly in the area of communications.

For, example, the ability of a radio receiver to select a certain frequency, transmitted by a station and to eliminate frequencies from other stations is based on the principle of resonance. 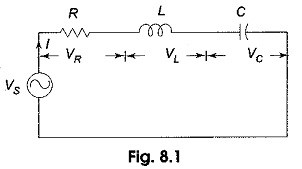 The total impedance for the series RLC circuit is

The circuit is said to be in resonance if the current is in phase with the applied voltage. In a series RLC circuit, Series Resonance Circuit occurs when XL = XC. The frequency at which the resonance occurs is called the resonant frequency.

Since XL = XC, the impedance in a series RLC circuit is purely resistive. At the resonant frequency, fr, the voltages across capacitance and inductance are equal in magnitude. Since  they are 180° out of phase with each other, they cancel each other and, hence zero voltage appears across the LC combination.

Solving for resonant frequency, we get 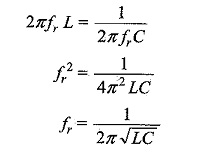