Pure liquids are those which are chemically pure and do not contain any other impurity even in traces of 1 in I09, and are structurally simple. Examples of such simple pure liquids are n-hexane (C6H14), n-heptane (C7H16) and other paraffin hydrocarbons. By using simple and pure liquids, it is easier to separate out the various factors that influence conduction and breakdown in them.

On the other hand, the commercial liquids which are insulating liquids like oils which are not chemically pure, normally consist of mixtures of complex organic molecules which cannot be easily specified or reproduced in a series of experiments.

The main impurities in liquid dielectrics are dust, moisture, dissolved gases and ionic impurities. Various methods employed for purification are filtration (through mechanical filters, spray filters, and electrostatic filters), centrifuging,degassing and distillation, and chemical treatment (adding ion exchange materials such as alumina, fuller’s earth, etc. and filtering). Dust particles when present become charged and reduce the breakdown strength of the liquid dielectrics, and they can be removed by careful filtration. Liquid will normally contain moisture and dissolve gases in small quantities.

Gases like oxygen and carbon dioxide significantly affect the breakdown strength of the liquids, and hence it is necessary to control the amount of gas present. This is done by distillation and degassing. Ionic impurity in liquids, like water vapour which easily dissociates, leads to very high conductivity and heating of the liquid depending on the applied electric field. Water is removed using drying agents or by vacuum drying. Sometimes, liquids are shaken with concentrated sulphuric acid to remove wax and residue and washed with caustic soda and distilled water.

A commonly used closed-cycle liquid purification system to prepare liquids as per the above requirements is shown in Fig. 3.1. This system provides for cycling the liquid. The liquid from the reservoir flows through the distillation column where ionic impurities are removed. Water is removed by drying agents or frozen out in the low-temperature bath.

The gases dissolved in the liquid are removed by passing them through the cooling tower and/or pumped out by the vacuum pumps. The liquid then passes through the filter where dust particles are removed. The liquid thus purified is then used in the test cell. The used liquid then flows back into the reservoir. The vacuum system thus helps to remove the moisture and other gaseous impurities.

Breakdown tests are normally conducted using test cells. For testing pure liquids, the test cells used are small so that less quantity of liquid is used during testing. Also, test cells are usually an integral part of the purification system as shown in Fig. 3.1. The electrodes used for breakdown voltage measurements are usually spheres of 0.5 to 1 cm in diameter with gap spacings of about 100-200 μm. The gap is accurately controlled by using a micrometer. Sometimes parallel plane uniform-field electrode systems are also used. 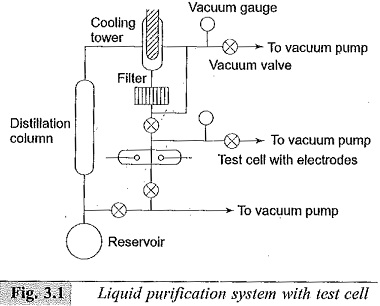 Electrode separation is very critical in measurements with liquids, and also the electrode surface smoothness and the presence of oxide films have a marked influence on the breakdown strength. The test voltages required for these tests are usually low, of the order of 50-100 kV, because of small electrode spacings.