In this Network Terminology, we shall define some of the basic terms which are commonly associated with a network.

Any arrangement of the various electrical energy sources along with the different circuit elements is called an electrical network. Such a network is shown in the Fig. 1.1.

A point where three or more branches meet is called a junction point. Point B and E are the junction points in the network shown in the Fig. 1.1. 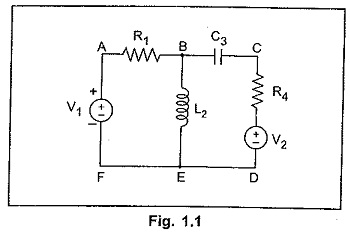 Mesh (or Loop) is a set of branches forming a dosed path in a network in such a way that if one branch is removed then remaining branches do not form a closed path. A loop also can be defined as a closed path which originates from a particular node, terminating at the same node, travelling through various other nodes, without travelling through any node twice. In the Fig. 1.1 paths ABEFA, ABCDEFA, BCDEB etc, are the loops of the network.