Basically network analysis is nothing but finding unknown branch currents or voltages across various branches. We can find these unknown parameters by using different network simplification techniques. These network simplifications involves basic Kirchhoff’s laws application, loop analysis, nodal analysis, star-delta (λ – Δ) transformations, source shifting and source transformation. The mesh analysis and the nodal analysis are the most useful techniques for the analysis of a Network Topology. But the disadvantage in these techniques is that the selection of unknown variables is difficult. The number of unknown variables increases as the network becomes complicated. Hence in such cases, the network analysis is made really simpler by using concepts in the network topology.

A linear graph is defined as a collection of various nodes and branches. A node is defined as a common point at which two or more branches meet together. A branch is a line joining two nodes which represents a circuit element.

A graph of any network can be drawn by placing all the nodes which are points of intersection of two or more branches. The network elements are represented by the lines joining nodes. The voltage sources and the current

Consider a simple electrical network as shown in the Fig. 5.1 (a). 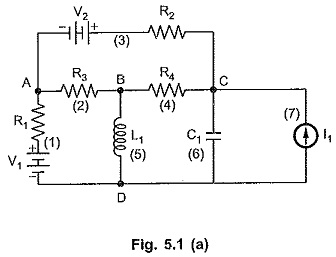 We will first identify the nodes and branches in the network. In the given network, there are 4 nodes and actually 7 branches in which there are network elements. But on the graph we will have only 6 branches because the current source without internal impedance mentioned can be replaced by the open circuit; hence not considered.

As discussed earlier, all the network elements are represented by a short line joining respective nodes. 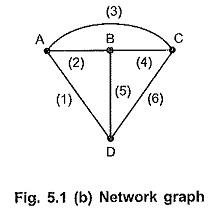 Oriented graph is a graph in which the orientations of the branches are known in the given network and the same are transferred on the graph. The oriented graph is also called directed graph. 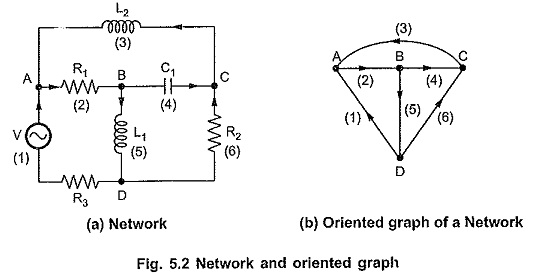 A planar graph is a graph drawn on a two-dimensional plane so that no two branches intersect at a point which is not a node.

The graphs shown in Fig. 5.3 are the planar graphs. 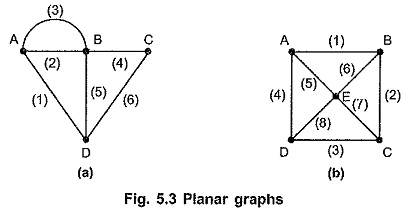 A non planar graph is a graph drawn on a two dimensional plane such that two or more branches intersect at a point other than node on a graph.

The graph shown in the Fig. 5.4 are the non-planar graphs.

If a subgraph contains all the nodes of a graph and the branches, then a subgraph is called improper subgraph.

A path is a improper subgraph such that,

Rank of a Graph:

If there exists n number of nodes (or the vertices), then the rank R of a graph is given by the relation,

Tree is a set of branches with every node connected to every other node, such that any one of the branches removed changes this property. In other words, we can state that it is a connected subgraph of a connected graph containing all the nodes of the graph not forming any loop. Thus, tree is a set of branches with all nodes not forming any loop or closed path. A graph and some of the possible trees are as shown in Fig. 5.7 (a) and (b).

Branch of a Tree (Twig):

A branch of a tree is called twig. If there are n number of nodes on a graph then the tree of a graph contains (n – 1) twigs. Then referring Fig. 5.7 (b), twigs of a tree can be written as follows.

A set of branches forming a complement of tree is called co tree.

The branches which are not in a tree are called chords or links. Refer Fig. 5.7 (b).

In general, a network consists of ‘n’ nodes which are interconnected in some way by ‘b’ branches, then it is possible to traverse adjacent branches starting at any node and return to the original starting node in different ways. Such a closed path formed by the network branches is called as loop.

Loop is a connected subgraph of a connected graph such that at each node there are two branches incident. If the two terminals are made to coincide, it will generate a loop or circuit. The following Fig. 5.8 shows different loops. 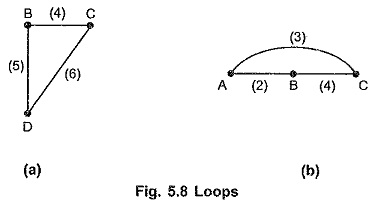 A loop of a graph has following properties.