Digital devices are based on Digital Electronics Basics circuits which can represent two states, ON or OFF. The ability to design integrated circuits consisting of thousands of transistors on wafer-thin; postage-stamp-sized chips has made Digital Electronics Basics both feasible and extraordinarily powerful. The chants are used to store, evaluate, manipulate and modify digital code. Integrated circuitry has made it possible to design circuits that can handle large quantities of digitally encoded data at enormous speeds. 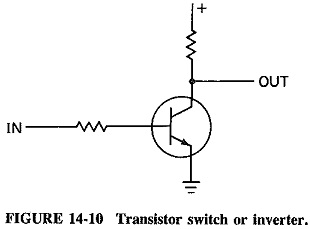 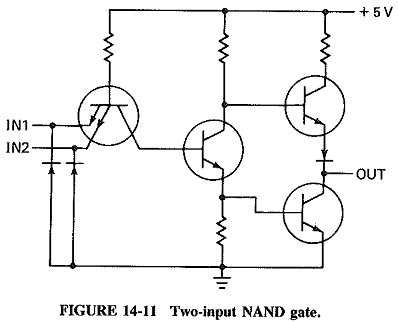 Another digital building block is the two-input NAND gate. This gate will provide a low output only when both inputs are high. Figure 14-11 is the schematic of a NAND gate from the digital family called transistor-transistor-logic (TTL). The NAND gate in the figure uses a “totem-pole” output stage which helps to speed up the transition from low to high. Other digital circuits are created from combinations of NAND gates and inverters. Some of the common Digital Electronics Basics are shown in Figure 14-12. The truth tables next to each of the logic diagrams indicate the actions of the gates. These basic gates are combined into more complex circuits needed for data processing. 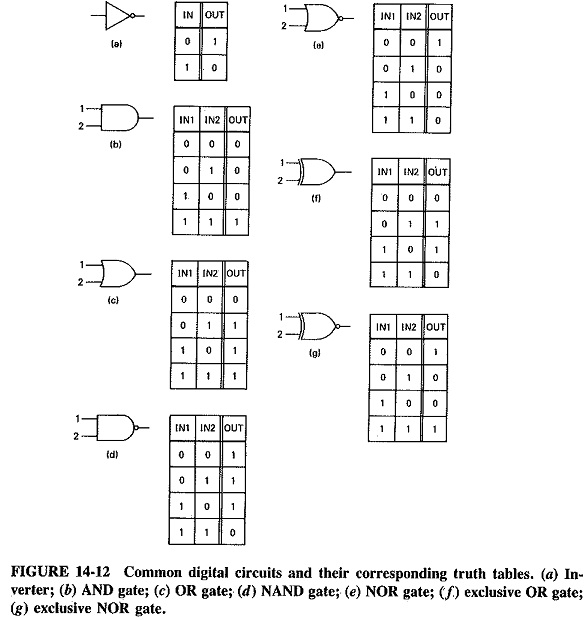 One of the intermediate building blocks of data circuits is the flip-flop, or latch. The batch simply accepts an input consisting of either a high or a low, and then latches it onto its output. The latch will retain that level until different input data is received. The latch forms a simple memory device retaining data until the system requires it to be changed. 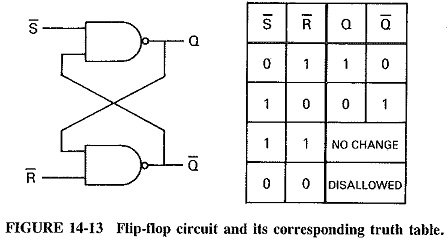 A simple flip-flop circuit can be constructed from NAND gates, as shown in Figure 14-13. Such circuits have been integrated, however, and designers usually choose the integrated devices.

Figure 14-14 shows the diagram of a device called a shift register. It is composed of a series of latches so connected that they will successively accept data bits and retain them until the next bit is received. The shift register shown is capable of performing several functions. It can be loaded with data from its parallel inputs, and the data can then be clocked out of its serial output. The result is that a stream of parallel data bits is converted to a serial stream of successive data bits. In a similar manner, it is possible for the device to clock in a string of serial data bits through its serial input and then to make these bits available at its parallel outputs. These serial-to-­parallel and parallel-to-serial conversions are important for data systems and data transmission. It should be noted that computer systems deal with data in a parallel form, although transmission systems most often require data to be in a serial form. Thus, in order for the computer data to be transmitted and then provided to other computer peripherals, it is normally necessary for serial-to-parallel and parallel-to-serial conversions to be made. Shift registers and similar devices will be noted as forming part of the data sets and other date transmission devices. 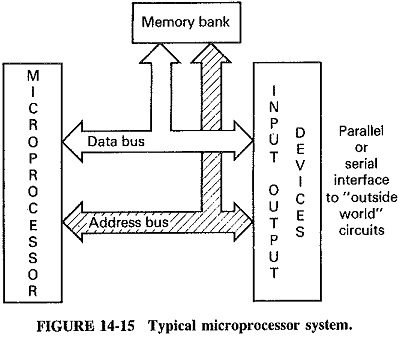